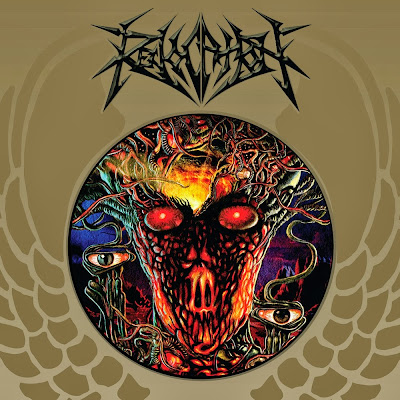 Last week was really odd but interesting, where the slightly tougher sound has dominated the stage, but mixed with comedy and English hipsterpop. During the upcoming days I'll try to go through the week with playing some of the bands that have been on stage here in Stockholm, however, it has been very sparingly with pictures, sorry.

First out I need to post this, Jeff Dunham was here last week for a Show at Hovet and it was freaking funny.

Here is a clip with Jeff Dunham - Minding The Monsters

Well, time to leave the funny part and let's kick of with a new acquaintance, Revocation is an American technical death metal band from Boston, Massachusetts. The band was founded by guitarist and vocalist David Davidson, bassist and vocalist Anthony Buda and drummer Phil Dubois-Coyne in 2000. The band was originally known as Cryptic Warning, but it changed its name to Revocation in 2006. The band released four studio albums, Empire of the Obscene, Existence Is Futile, and Chaos of Forms in 2008, 2009, and 2011 respectively, and subsequently signed to Relapse Records. They released a self-titled album, Revocation, in August 2013.

Revocation are currently on tour in Europe with The Black Dahlia Murder and Aborted, in support of their self-titled fourth studio album which was released this past August on Relapse Records. When they return from Europe, Revocation will be back on the road in North America on tour with Death Angel, 3 Inches of Blood, Battlecross and Diamond Plate. The dates start October 18th in San Francisco, CA and run through November 10th in Santa Ana, CA. The band will also play a headline show in Des Moines, IA on October 14th before kicking off the tour.

The show at Klubben was really well played and full of energy and I must say I liked what I heard.

Todays tune "Invidious" is taken from the fourth studio self titled album "Revocation", released on August 5, 2013. The video was shot by David Brodsky (Municipal Waste, Whitechapel, Kylesa) at a sold out hometown show.

***European Tour with The Black Dahlia Murder and Aborted***

***US Tour with Death Angel, 3 Inches of Blood, Battlecross and Diamond Plate***