Kent did a really great show at Zinkensdams IP, i belive this was one of the best shows i have seen sofar and i have seen them many times, so many that i have lost the count :) Everything was perfect, light was marvelous with excat timing, thanks Morgan Brown for that work and skuggan deliverd the sound as it was suppose to sound, great done.
Anyway this video is an amatur one, great done so enjoy this tune.

Yesterday i was working at Zinkensdams IP with Kent & Thåström
Thåström was the opening act for Kent and he just ruled the stage with his whiskey voice. He will do 4 shows with Kent during thier summer tour.
Here is 'Du ska vara president' with Imperiet, one of the songs he performed and tomorrow its time for a Kent tune. 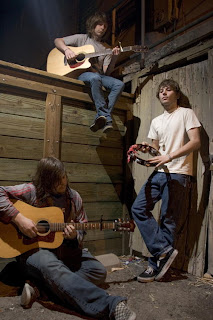 Music today often feels like it’s all about image; the look of a band or how "professional" the album sounds have become dominating priorities when recording and marketing an artist. To hear someone like Olin and the Moon, whose music and lyrics are grounded in earnestly, is a stimulating change of sonic scenery and it sounds brilliant.

Todays tune is "Open Air California" with Olin and the Moon

If you want more Olin and the Moon check out thier MySpace
Upplagd av Stones kl. 11:38 No comments:

Battles debut "Mirrored" was excattly the vitamininjection that rock needed year 2007.
The record ended very high up on the year best lists all over the world.
The band has roots in Helmet and Don Caballero and is one of the coolest thing on stage.
They did a really great performance at the Accelerator Festival yesterday.
Battles is the shit.

Yesterday BOH did a marvelous performance at the Accelerator festival.
Coulnt find any good video with this tune, but the music is great, so here is Band Of horses song 'Cigarettes Wedding bands' from album "Cease To Begin". Enjoy ;)

Tomorrow this girl will enter the stage at the Accelerator festival.
Listen to this wonderful voice, enjoy!!

Johnny Flynn & The Sussex Wit are a country/blues/folk band from South London, signed to Vertigo Records. They are fronted by Johnny Flynn, a 25-year old actor, poet and songwriter who cites W.B. Yeats and Shakespeare among his influences.

Here is the Official promo video for 'Tickle Me Pink' by Johnny Flynn and later on today they will perform at The Accelerator festival and yes i will be there :)

Foo Fighters - Band On The Run

Bo Diddley- In His Prime

Bo at his best, singin' playin' and dancing. This was shot when Bo was at his peak.

Todays tune is a great song from Mr Diddley.

Nirvana - Where Did You Sleep Last Night

Here is a nice tune from Nirvana and yes this song by leadbelly have been posted before but first time with Nirvana.

Swing is a rapper originally from NY who has been living in and out of Sweden. Swing’s a member of the band Blacknuss Allstars and he’s also touring as a guest artist with Teddybears STHLM. He’s the artist performing on their hit song “Hey Boy”.

Swing has also been cooperating with many other prominent artists, for example Ebbot from the critically acclaimed rock band Soundtrack Of Our Lives, Andreas Kleerup (“With Every Heartbeat”) and Robyn to name a few. The cooperation with Ebbot resulted in Swing’s latest hit song Winner which quickly became one of the most aired music videos in Scandinavia.


Here is the video for Swingflys Winner! feat Ebbot (Soundtrack Of Our Lives).

Sahara Hotnights - Quite a Feeling

The 7th and band from WTAI.

Great tune from these girls.
They did a great gig even if it was in the middle of the day.

These bands did perform at WTAI this year.

The 6th band out on WTAI are QOTSA.
Josh was very sick this day, but that didnt stop him to enter the stage and play some great songs.

Here is a nice tune from their fourth album, Lullabies to Paralyze.

Here is a little thing Josh sayed during the show.

Josh: "Stop throwing things up on the stage. If anything hits me, I'm gonna drag you up here and buttfuck you in front of all your friends. ... Ask Norway! ... And now, a love song."

The 5th out from WTAI and todays is the big day :)

Dinosaur Jr is an American alternative rock band formed in Amherst, Massachusetts in 1984. Originally named Dinosaur prior to legal issues, the band disbanded in 1997 until reuniting in 2005. Guitarist J Mascis, bassist Lou Barlow and drummer Murph were the band's founding members; however, Mascis has been the group's sole continual member.
Their distinct sound, characterized by high gain, extensive use of feedback and distortion, and frontman J Mascis's melodic guitar solos, were influential in the alternative rock movement of the 1990s, exemplified by the success of acknowledged fans Nirvana.

The 4th band out on WTAI.

The 3:rd band from W.T.A.I is Foo Fighters, one of the big headliners.
Foo Fighters is an American alternative rock band formed by singer/guitarist Dave Grohl in 1995.
Grohl formed the group as a one-man project after the dissolution of his previous band Nirvana in 1994.
Prior to the release of Foo Fighters in 1995, Grohl drafted Nate Mendel (bass), William Goldsmith (drums), and Pat Smear (guitar) to complete the group.
Goldsmith and Smear left after the recording of the group's second album The Colour and the Shape (1997).
They were replaced by Taylor Hawkins and Franz Stahl, respectively, although Stahl left prior to the recording of the group's third album, There Is Nothing Left to Lose (1999).
Chris Shiflett joined as the band's second guitarist after the completion of There is Nothing Left to Lose.
The band released its fourth album One by One in 2002.
The group followed that release with the two-disc In Your Honor (2005), which was split between acoustic songs and harder-rocking material. Foo Fighters released its sixth album Echoes, Silence, Patience & Grace in 2007.
Over the course of the band's career, three of its albums have won Grammy Awards for Best Rock Album, and all six have been nominated for Grammys.
Todays tune is the first single and video from the album Echoes, Silence, Patience & Grace.

Mando Diao is a garage rock band from Borlänge, Sweden.
The 2:nd one of Artists at W.T.A.I

The roots of Mando Diao date back to 1995 when Björn Dixgård and the former Mando Diao-member Daniel Haglund were in a band called Butler. Band members came and went and four years later the rest of the current line-up decided to take that project more seriously. Björn Dixgård and Gustaf Norén locked themselves up in a summer house and spent 14 months writing songs. They claim the Beatles as their original source of inspiration. Actually, Gustaf joined after he and Björn had talked all night about them. The two renamed their band Mando Diao. According to the band, the name has no particular meaning, and it appeared to band member Björn Dixgård in a dream.

The Hellacopters - The Devil Stole The Beat From The Lord

This week im doing a festival that is named "Were The Action Is" or W.T.A.I.
So i will publish some bands and great songs from the bands that will perform there on Saturday the 14:th.
First out is The Hellacopters with the Music Video for "The Devil Stole The Beat From The Lord"

Got so stuck with Mr Steve after his last visit so i need to add one more song.
I found this beautiful tune with Emmylou Harris, enjoy.

The Byrds (formed in Los Angeles, California, in 1964) were an American rock band.
The Byrds were popular and influential through the latter part of the 1960s and early 1970s. Critic Richie Unterberger declares The Byrds' most enduring contribution was "melding the innovations and energy of the British Invasion with the best lyrical and musical elements of contemporary folk music," but they also helped forge such subgenres as folk rock, space rock, raga rock, psychedelic rock, jangle pop, and –- on their 1968 album Sweetheart of the Rodeo –- country rock. After several line-up changes (with lead singer/guitarist Roger McGuinn as the only consistent member), they broke up in 1973.
Some of their trademark songs include pop covers of Bob Dylan's "Mr. Tambourine Man" and Pete Seeger’s "Turn! Turn! Turn!", and the originals "I’ll Feel a Whole Lot Better", and "Eight Miles High".
They were inducted into the Rock and Roll Hall of Fame, and several band members have launched successful solo careers after leaving the group. In 2004, Rolling Stone Magazine ranked them #45 on their list of the 100 Greatest Artists of All Time.
Todays tune is Eight Miles High.
Enjoy

Today its Swedens Nationalday so todays tune will be a National Anthem.
And i found a cool one with an old punk band and this video is from 1994.
Enjoy.

Dio - Stand Up And Shout

Yesterday did Dio perform at Debaser/Stockholm, great show but it was hot like hell indoors.
Drank gallons of water during that evening.
Here is one of the songs that he played during that show.
Today they will perform in Helsinki i belive.
Anyway...enjoy this one.

Allison Moorer is a Grammy-nominated American alternative country singer and the younger sister of Shelby Lynne.
Also the husband to Steve Earle.
She was the opening act and duet singer for Steve Earle yesterday when they both performed at Circus/Stockholm.
The show was great and they did well and both Steve and Allison was in a great mood witch contribute to a great performance.


Music video for the song Tumbling Down from Allison's excellent album 'Miss Fortune' released in 2002.

Steve are in town and im going to be there :)
Looking forward to the gig, to bad he aint bringing a band but he is still Steve.
Here is a great classic from this guy.
Steve Earle on David Letterman in 1988 performing Copperhead Road and being interviewed after. His guitarist at the time, Zip Gibson is playing guitar with Letterman's house band.

Doug was one of the opening act at Tarjas gig.
He was totally amazing and his music hit me like a stick in the heart.
This song is a very cool one.

Today im doing Tarja Turunen at Tyrol, i hope it will be a great gig, sounded well at the soundcheck when she did the "Over the hills and far away" song :) The musicans she use on this tour are amazing.
As for example on Bass: Doug Wimbish (he has played for a vast range of artists, including Jeff Beck, Mick Jagger, Madonna, George Clinton, Bomb The Bass, Depeche Mode, Mos Def and now Tarja Turunen.)
On Guitars: Alex Scholpp (Farmer Boys), Drums: Mike Terrana (working with bands like Yngwie Malmsteen, Tony Macalpine, Steve Lukather, Masterplan, Gamma Ray, Rage, Axel Rudi Pell etc)

Anyway here is an old Nightwish song witch i know will be one of the extra numbers she will do.