We Hunt Buffalo - Back To The River 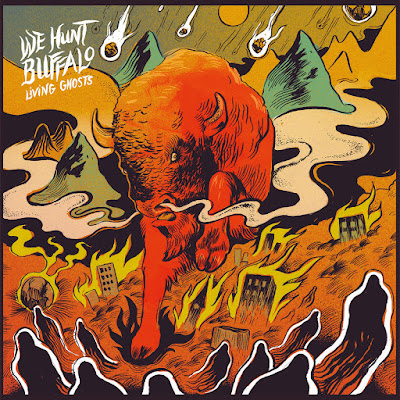 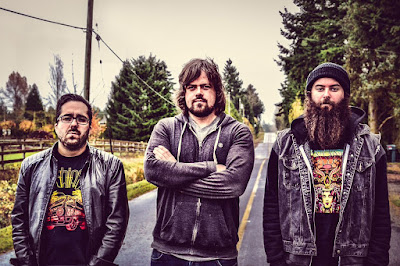 "Living Ghosts" reminds me of a fruit and not any common fruit as orange or banana, the fruit I have in mind is Chilli, to be more precise. It changes colour nicely during growth, first green, then orange and later take the most fenced blood-red hue. The album sprawls and changes directions during it's play time and touches many different genres, it's really hard to add "Living Ghosts" in a specific tray, almost as if they have to create a new one.

"Living Ghosts" is really fresh and becomes stronger the more you listen. It starts grand with the magnificent instrumental "Ragnarök" which then melts into "Back To The River", a well packed heavy riffery machine that will blow you away, reminds partly of MASTODON, then the record accelerate to a more punkish, slimy, dirty rock n’ roll with "Prairie Oyster". With the 4th track "Hold On" the album take it first turn to the left with a new direction, still heavy but with a more melodic progressive approach (hey FAIR TO MIDLAND), the album continues in this path with killer tune "Comatose". On the 6th track the band hits the break and slows down and gives us the beautiful "Fear". Then it makes another turn, this time to the right and let us flow away with the guitar driven melody of the tune "The Barrens" (The chorus sounds almost like WITCHCRAFT). I slobbers already like a dog and "Looking Glass" plays in my head and follows the previous tune in style. I giggling a bit inwardly and wondering how this will this end. "Walk Again" takes the album to another direction and I start to wonder, is this still the same band. The vocal part is filled with sorrow and regret, the music is more lay back and slowly grows until it fades out in to a psychedelic noise. The album closer "Transcandemic" is a nice well crafted piece that ends the album with a dignity.

If you are into bands like KYUSS, MASTODON, FAIR TO MIDLAND, WITCHCRAFT or Heavy rock, Grooves, Stoner, Desert rock then this is something for you. "Living Ghosts" is a amazing album with a lot of great passion, soul and drawn out grooves, a album that you should not miss!

Listen to ”We Hunt Buffalo - Back To The River" on Spotify here!