Mark Fox is back together with Swiss hard rockers SHAKRA. Chris von Rohr said the following after former singer John Prakesh left the band in early 2014: “Let’s bring back together what belongs together”.

That being said, it took a while till the early disputes had been put aside but in late summer of 2014 it was clear to everyone that it’s time to do it again Since that point of time, the whole band shed blood, sweat and tears to finish their new album High Noon which will be out on January 29, 2016.

Reunited with vocalist Mark Fox (aka Markus Fuchs), last heard from back in 2009, SHAKRA send out the melodic rockin' "Hello" in advance of the 2016 release of the group's tenth studio album, High Noon. As usual with the consistently strong and reliable SHAKRA, the twin guitar team of Thom Blunier and Thomas Muster power the tight Swiss group. Fox augments the SHAKRA show of force with his vivacious vocal delivery. The tune is a really melodic rockin' piece, see the video or check it out at Spotify, all can be find below! 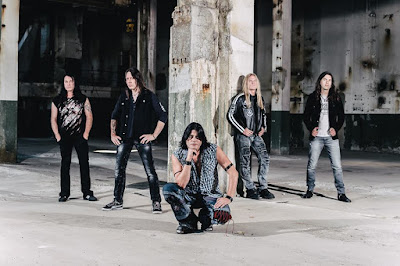 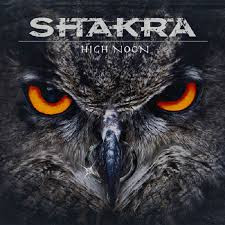 With their first releases "Shakra" (1997), and "Moving Force" (1999), and by touring with GREAT WHITE and URIAH HEEP, the early career of this Swiss band was a steep learning curve with dramatic success but the real breakthrough came with their third record "Power Ride" (2001) when singer Pete Wiedmer was forced to leave the band because of ill health, replaced by Mark Fox. Mark immediately put his stamp on the following album "Rising" (2003), which saw SHAKRA rise higher on the career ladder than ever before and hit the German and Swiss album charts. The band played several concerts and festivals, one of which was the prestigious "Bang Your Head" event. The controversial video clip for the song "Chains Of Temptation" showed singer Fox giving himself a heroin injection.

And, after supporting IRON MAIDEN at the Swiss "Spirit Of Rock" festival, SHAKRA then took the decision to tour through 12 countries with HAMMERFALL and STRATOVARIUS. The band played a huge show in Zurich with GUNS N' ROSES in 2006.

Shortly after the Everest album was released, Mark Fox left the band and was replaced by John Prakesh on vocals. On April 23, 2014, John Prakesh announced he was leaving SHAKRA.
And Mark Fox rejoined the band :)

Ps if the video doesn't work in your country, you can see it here!