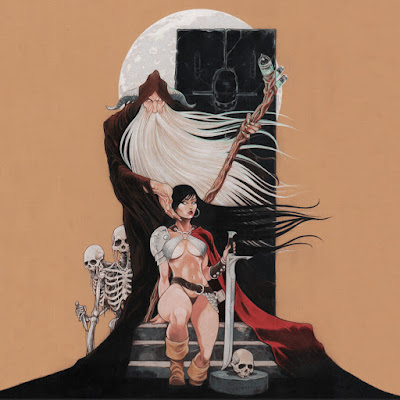 New week, a new Monday and a new "The Record Of The Week"

A quartet from Denver US, we find the 20 Buck Spin début "Absolution" with KHEMMIS. A band that bumped into by accident during a bandcamp surf a boring evening when the hole family was watching some reality show! Something that I skip and use that time to listen to music instead and this is something that I just love.

"Absolution" have all the components that's needed to be a listenable record. A slow, heavy doom album with melodic nasty guitar tones that reminiscent of stoner metal and a mix of contemporary sludge. It's progressive and brutal without getting too much in one direction. The riffs are cleaver, where the solos partly sings "classic metal" and the rhythm section doing their job to create a massive heavy and progressive atmosphere. The vocals are mixed between deadly growls and very clean. A terrific way to work out the vocal part on this record. The result is "Absolution" a six track, forty-minute journey of properly crafted tunes that shows a very high level writing skill and musicianships. KHEMMIS music breathe fresh and forge a new brick to what heavy progressive doom rock is in 2015.

Summary: "Absolution" is among the biggest surprises of the year. KHEMMIS have made the best debut album of 2015!