A new week and it also means that it's time to present this week's album. This time we steer the ship of the big country America. There, we find "Warlord" a heavy metal band, formed in 1980 and based in Los Angeles, CA. This 'Warlord' should not to be confused with the '70s English punk rock group Warlord UK, the '90s death metal group Warlord UK, or any later groups by the same name.

This week "Record Of The Week" is the album "Deliver Us", the record that I have chosen is couple of years old, to be precise 30 years. This is an album that I had forgotten completely, but by chance I ran in to it again, however it was on the digital format. One can say that this is a true classic gem that should be in a well-stocked record shelf, how difficult it is to get hold of today I have no idea, would like to come across one on Vinyl, as far as I know, I do not have this today, if to a presumption is in a forgotten box somewhere though it feels a bit distant. So if you have it, contact me directly. 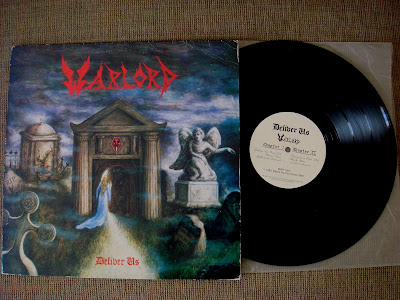 Warlord is the brainchild of guitarist/songwriter Bill Tsamis and drummer Mark Zonder, coming out of San Jose/USA back in 1980, was one of the most talented metal acts. They got well-known for the first time by submitting an entry for the "Metal Massacre"-sampler, the chosen song was "Lucifer's Hammer". 2 months later they released their awesome debut album "Deliver Us" which contained 6 brilliant classic heavy metal songs. The response on the debut from all over the world was extraordinary high and positive. With their sensitive, sympathetic and melancholic music they (Damien King (vocalist Jack Rucker) - vocals, Destroyer (Tsamis) - guitar, Raven - bass, Sentinel (Diane Kornarens) - keyboards and Thunderchild (Zonder) - drums) got amazing votes. Another entry (Mrs. Victoria) for the "Metal Massacre vol. 3"-sampler followed soon in 83 as well as a almost unnoticed vox-change since the new man (Damien King II) was pretty equal to damien king and the only difference between might have been their personal data.

Afterwards they recorded the single "Aliens/Lost and Lonely Days" which was released in june of 84. Again the line-up changed when the new bass player Archangel (Dave Watry) joined in. In the end of 84 they recorded a live video whose soundtrack was released as the LP "And the cannons of destruction have begun..", containing 4 songs from the debut, the 2 from the single and also the 2 new songs "Soliloquy" and "MCMLXXXIV".

Their biggest problem was probably they couldn't get a decent management and Metal Blade seemed to be unable to promote them very well and so their work was limited to 1 single and 1 LP in the end. Also they never ever made it to play live, not even once! Because of different activities and interests (Bill hung around with the London Philharmonics and Mark did drum-tec for Fates Warning) between Mark Zonder (Thunder Child) and destroyer (Bill Tsamis) the band broke up after a time and so one of the most original as well as talented heavy metal bands died. In the end metal blade released a best of-LP called "Thy Kingdom Come" in 86 and another compilation which has all Warlord songs in 93 ('Best of Warlord'). 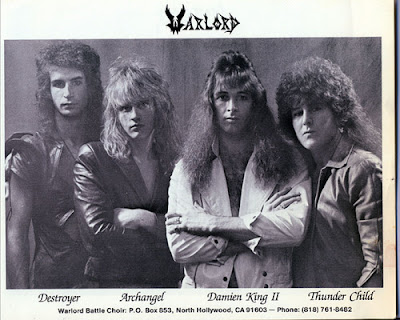 An extended version, including the whole Deliver Us EP, followed in 1989, titled Best of Warlord. It was the first time the band's music had been issued on compact disc, (hey Chief Rebel)!

Retaining a considerable underground following as a much beloved cult band over the years, Warlord reformed in 2002. Original members Tsamis and Zonder were joined by HammerFall vocalist Joacim Cans, a long-time Warlord admirer whose band had in fact covered the Deliver Us classic 'Child of the Damned' on their debut album, Glory to the Brave, in 1997. Warlord issued Rising Out of the Ashes via Italian Athreia Records. That same year, Tsamis, Zonder and Cans, backed by members of the Italian band Black Jester, played their first ever live shows at the Wacken Open Air festival.

Until 2011 no further activities had taken place but vocalist Joacim Cans stated in a February 2009 interview with the Italian metal magazine, Metal Maniac, that another album might be in the realm of possibility should there be sufficient label interest. Later the same year Bill Tsamis announced in the band's fan (The Warlord Battle Choir) page on Facebook that the band was once again in the studio. On March 12th, 2012 on the eve of his 51st birthday, Tsamis surprised Warlord fans with the first Warlord song in 10 years, called "Night of the Fury". It was then also revealed that vocalist duties were once again handled by Rick Anderson (Damien King III) whose stint at Martiria had just ended. In August 2012, Warlord announced that it would headline the 2013 Keep It True XVI Festival. This announcement was followed by two more dates in Greece in Athens and Thessaloniki.

As a bonus today you get a very rough mix of a new Warlord song "Night of the Fury", enjoy!

Bill Tsamis auditioned for the vacant guitar spot in the Ozzy Osbourne band after the death of Randy Rhoads in the spring of 1982. After initially selecting George Lynch, new auditions were held in December '82. The position would go to Jake E. Lee instead.

Yngwie Malmsteen cited Warlord as his favorite band during an interview with Music Connection magazine in the early '80s.