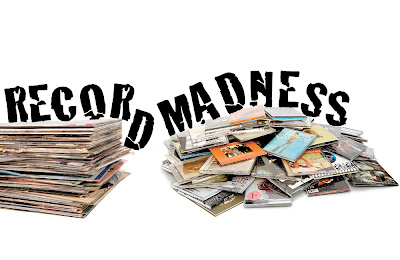 Record Madness is a project between Metal blog and Tune Of The Day, a project that has been and boiled under low heat for a long time but now finally became a reality.

Everything started with "Chief Rebel" who dived into the letter "A", and wrote a mammoth post with lots of pictures of what was in his record shelf under the letter A. Very interesting reading, check it out here! However, it's in Swedish, but use a translator, it's worth it, believe me.

The possibilities of weird, twisted and confused things is big. The risks of crazy and odd records in focus are obvious. It will probably take a long time to scroll through the alphabet, but that was the bit of the point. Each writer takes his task with the time he can, the aim is that it should be pleasurable, and really a chance to make impact in one's record collection.

While my colleague focuses on the digital format, I will dig deep into the analog swamp, of course there are the occasional CD in the collection, but I have to admit that it's pretty tiny. My angle will contain a little of everything, but mostly focus on the analog format, ie Vinyls. I prefer that format,  perhaps not everbody choise, but I like the physical product, I want to hold the cover, read all the text when the record spins so beautiful on the turntable. 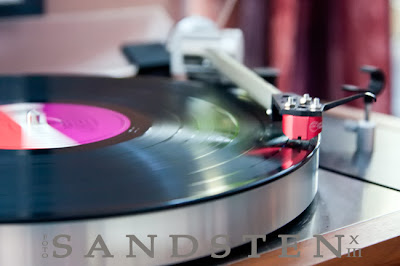 That the "Chief" stick only to the digital format, is because he has given away most of the vinyls, I got a paper bag from him, it contained some classic sweets cuts. Thanks for the bunch of records man, i really enjoyed them!

Well lets get started,  my challenge to master to today is the letter "L", that the man "Chief" chosed "L" as a challenge and the start was almost given. 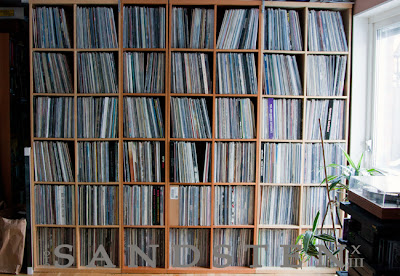 Under the letter "L" you will find my household gods, "Led Zeppelin".  And when take a closer look what's under the letter "L", i notice that it gets a little thin with other stuff, there is not really room for much else but "Zeppelin" that virtually takes all place :) That it is a bit thin on the shelves probably because I still have a bunch of banana boxes up in Norrland, usually take one every year I go up. Though I'm starting to get very little space, maybe time to move to bigger place soon?? 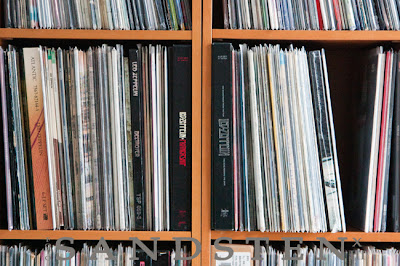 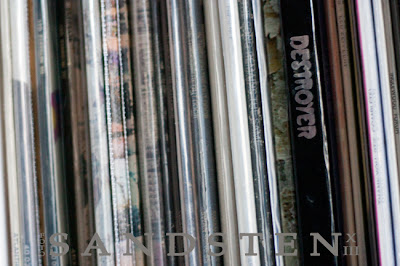 That it became Led Zeppelin that took my heart is a long story if you count the years. But to keep it brief. I guess I was maybe 10 years or so, a classic punk from Norrland, a snotty-nosed bastard who liked AC/DC and Iron Maiden. Spent most of my time off with my brother who was living in the music rich town Stockholm and had a pretty nice collection of vinyl records, however, contained the mostly of Frank Zappa and old jazz, but one or another rock album, where Led Zeppelin was one of them, which I secretly listened to when he was not home :) The riff and empathy in their songs stuck as a chewing gum that just was etched in the head, oh yeah, it's still remains today, and I enjoy almost always when I hear them played.

So here are some pictures of the records.


Why do so many of the same ... hehe erm, well, geek that I am, then you need a pair or more. First you have to have the original from the UK, where the band originated from, then you will need a U.S. original, because it sounds a little different, then you want to have the later version that have the new remaster and pressed in the best possible way, then you can always add a few odd issues such as the Blue Houses of The Holy that comes from Korea, fun for its very own cover. 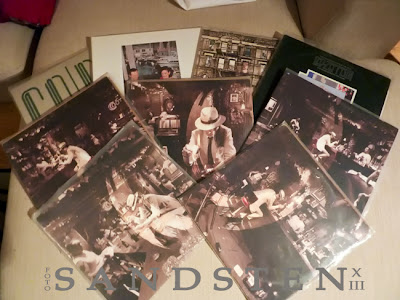 In Through the Out Door  album as you can see have different pictures, there were six different sleeves featuring a different pair of photos and the external brown paper sleeve meant that it was impossible for record buyers to tell which sleeve they were getting. (There is actually a code on the spine of the album jacket which indicated which sleeve it was—this could sometimes be seen while the record was still sealed.) I only got five of these, need to get the last one to complete the set, so someday.  :) 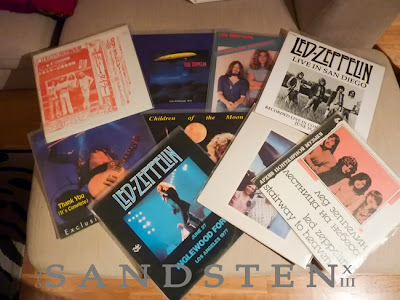 Here are a few live recordings that i have on Vinyl where the sound is of variable quality. 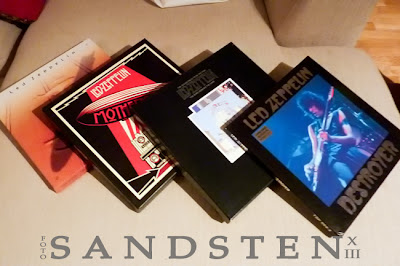 Some boxes on Vinyl were the last one "Destroyer" is a live recording with awesome sound quality. 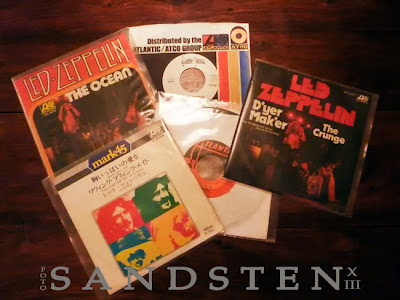 A handful of 7 incher.

Like the Chief, it is of course important to have an order in your record collection. How the hell should you find a record you are searching for in the piles, if everything was laying all over the place. Alphabetical order first, then the order of release within each artist. That I then have a crate with records which are in line to play is of course a different story, where the last purchase usually ends up at the front, which is completely wrong, because it would mean that the record is located in the back can catch some dust before I've even got there. Something that I have to overcome. 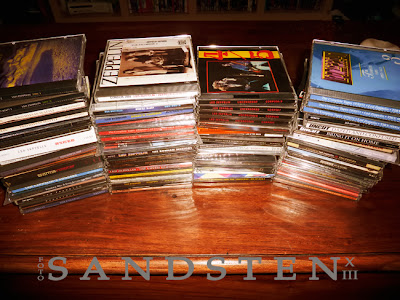 A bunch of Zeppelin on CD 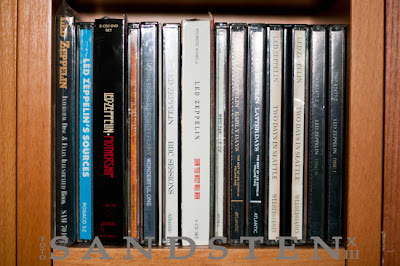 Even I use IKEA Benno's for storage of CDs 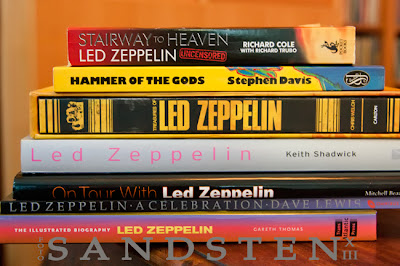 Books you need, both for enjoyment, pastime or curiosity. 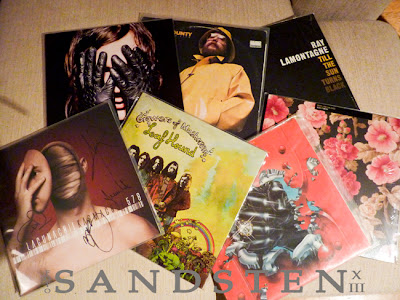 Certainly there is little else under "L", a mixed bag of Leaf Hound (excellent rock, a must have if you dig 70's rock), Bill La Bounty (old man in the yellow raincoat) it's kinda funny, but good record, i just love to cover, what was he thinking about when it was time to release this???, Lacuna Coil, Legs Diamond (classic hard rock with the punch in your face cover) and Mark Lanegan (Awsome Singer Songwriter rock.). There, we covered the genre Rock, Hard Rock, Soft Rock and Singer Songwriter. 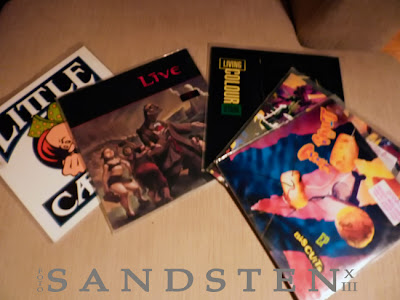 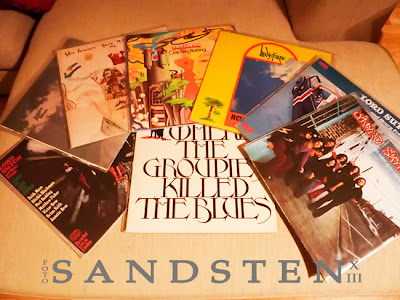 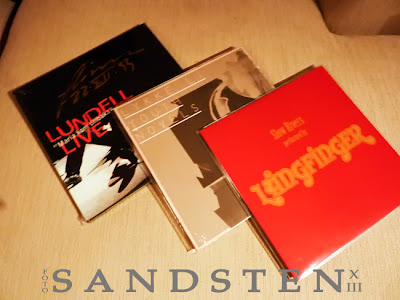 Even some Swedish can be find in the collection, Ulf Lundell, Lykke Li and Långfinger. 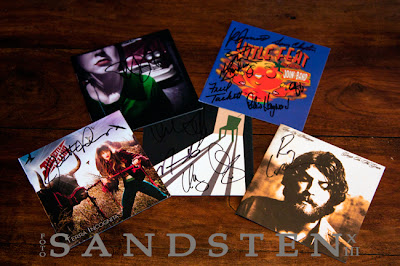 Digged a bit among the CD discs and found a small bunch of signed albums, had almost forgotten that I had them, quite fun. In the picture we find Lemonheads, Living Colour, Ray LaMontagne, Little Feat and Juliette Lewis. 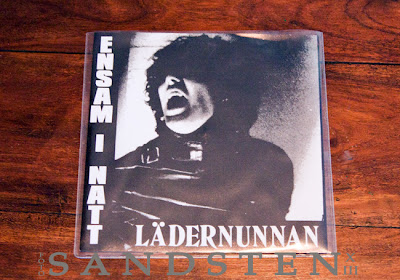 Even a real Swedish classic with Leather Nun appeared.

That's it, as a first shot in the series Record Madness. It will take form along the way. This was a very fun thing to do. That it has popped music during the creation of this is of course a obvious, all day basically, been a little "home alone", fun as hell. Neither I or "Chief" know how it will develop, and what each letter with it (there are, for example, a large wedge land to describe the records under the letter 'M' compared with 'Q', as only the amount of records represents a different approach and it should add personal favourites that might be found on some letters ...) and how long it will take between the various interventions.

I will wrap this up with sending the puck to "Chief". He knows nothing about the letter that will be his next target, for it will be choosen by me here and now. (just as little I know what he's going to send it back eventually).

I'm starting a little soft with choosing a letter that does not contain 1/10 of the collection, but is a bit more limited, but I am a bit unsure of what is hidden behind his.

Chief's mission is to describe what hides behind the letter "R". I know of course that there are one of the groups that actually he digs really hard, maybe it is even his household gods, it remains to see how it develops and I'm very curious about what a recordaholic as Chief actually possesses with that particular group. The glove is thrown. The challenge is started!