Rainbow - A Light In The Black 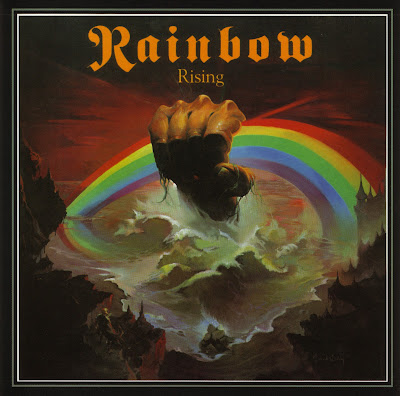 New week, which means a new album that may be titled "Record Of The Week". Yesterday when I was looking for the sunday classic and played some Thin Lizzy and after all search for the right classic, so for some reason will always Rainbow's "Rising" comes up, it shows up like a jack in the box. Wondering if it's the cover that makes you always pull it out, or it may be a magnetic field that surrounds the record, what do I know, there it came anyway, and there it lay completely untouched until Thin Lizzy was fully completed and it was time to put on a new album, which got to be "Rising", heck and holy moses what a record this is, the memories you get, hell of swing the band creates, do not know how many times I clicked the volume button during the play, but it was quite high at the end, all i can say it was a wonderful time all the 33 minutes or so.

Rising (also known as Rainbow Rising is the second hard rock/heavy metal album by Rainbow, released in 1976. This is the only album of the band that has reached Platinum status in the USA.

With Ritchie Blackmore retaining only Ronnie James Dio from the previous album, he recruited drummer Cozy Powell, bassist Jimmy Bain and keyboard player Tony Carey to complete the new line-up. Recorded in Munich in less than a month, the album was overseen by rock producer and engineer Martin Birch. The record was originally billed as Blackmore's Rainbow in the US. 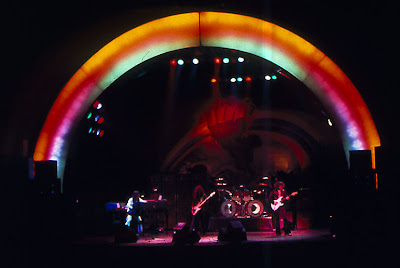 Few of the album tracks made it into the band's live set: "Stargazer" and "Do You Close Your Eyes", written prior to the inaugural US tour in late 1975, featured in all the 1975 and 1976 shows, while "A Light in the Black" was dropped early in the 1976 tour, although it was reintroduced into the set during the Japanese dates. "Starstruck" was played in shortened form usually as part of "Man on the Silver Mountain".

According to the All Music Guide, Rising captured Blackmore and Dio at the peak of their creative powers...(it) chronicled both the guitarist's neo-classical metal compositions at their most ambitious, and the singer's growing fixation with fantasy lyrical themes — a blueprint he would adopt for his entire career thereafter.

The album showpiece, the 8 minute and 26 second piece "Stargazer", which features the Munich Philharmonic Orchestra, originally had a keyboard intro found on the 2011 Deluxe Edition's "Rough Mix" version.

The first CD issue had a slightly different mix to that of the original LP, including, for example, a longer delay before the band entered after Carey's opening solo in "Tarot Woman", a longer play-out on "Run with the Wolf" and the track "Stargazer" had the vocals mixed without the delay, the extra synthesizer deleted and some of the phased sounds deleted. When remastered in 1999 the original vinyl mix was restored.

After several reschedulings, the album was finally released in Japan on April 5, 2011 as a 2 SHM-CD (Super High Material CD) Deluxe Remastered Edition. This limited edition reissue will only be released in a cardboard gatefold sleeve (mini LP-style paper jacket) featuring the "high-fidelity" SHM-CD manufacturing process (compatible with standard CD players) and is part of a two-album Rainbow cardboard sleeve reissue series featuring Rainbow Rising and Down to Earth. Both feature the unique-to-Japan obi strip and an additional insert. 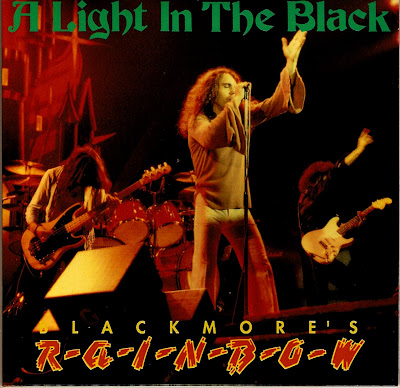 Here is a full show from 20/10 1977 in Munich, when Rainbow is performing. The electric rainbow that spanned the stage used so much power, it frequently interfered with the guitars and amplifiers.


In issue 1 of Kerrang! magazine, Rising was voted as the number 1 album of all time. 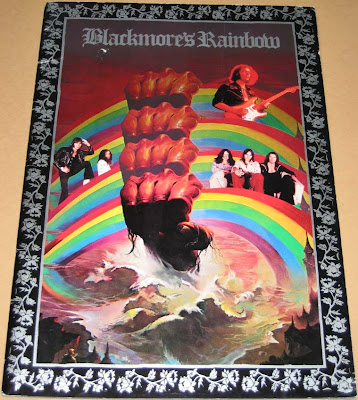 German thrash metal band Paradox (German band) covered the song "A Light in the Black" on the "Tales of the Weird" album (as bonus track).

Listen to "Rainbow - A Light In The Black" on Spotify here!

I thought I would leave my first comment. I don’t know what to say except that I have enjoyed reading. Nice blog, I will keep visiting this blog very often.

Thanks for that Absolutespotless. Always nice to get some feedback. Keep it up and Rock on!

Great info! Very simple and easy…nobody can explain as interesting as this. I appreciate your time and effort on making things simple and easily understandable. I have bookmarked your site...

I was surprised to learn the same about your blog--- I loved it.I am a big fan of your blog.i am so excited by read of your blog's content.really great post.Thanks for sharing.

Thanks for the wonderful post. I've been looking around the web for this type of information and finally found it.