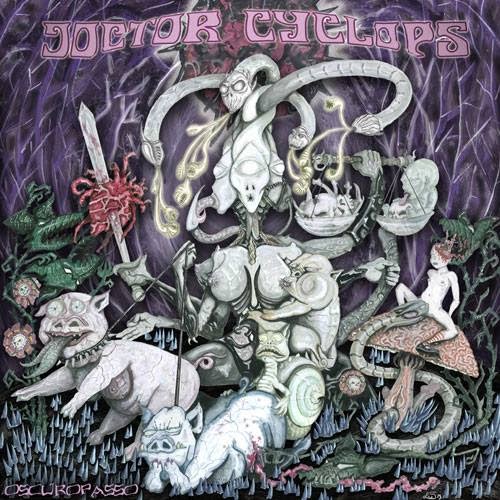 Doctor Cyclops is a seventies-style power trio playing heavy rock music inspired by a vintage sound, eldest son of glorious Balck Sabbath and of other more underground heroes from the 70ies and early 80ies such as Truth and janey, Sir Lord Baltimore, Captain Beyond, Witchfinder General. Even later and more modern references are warm-vintage style ones: Witchcraft, Firebird, Cathedral, Spiritual Beggars just to say some.

The project was born in 2007 in Oltrepo in a small village called Bosmenso, in the middle of the Appennino mountains. A place where winters are long and quite often really cold. Former members are Christian Draghi (guitar and vocals) and Francesco Filippini (bass), childhood friends who try to push by with their passionated love for music and good riffs. Doctor Cyclops’ music is an obscure kind of heavy old style rock, its groove made by a miscellanous heap mix of influences, which go from the progressive to the doom stuff played with a raw and dusty wish.

They record the first demo-ep in the spring of 2008, and call it “The flying machines burning”. It contains four songs, two original tracks (“Night Flyer” and “Eileen O’Flaherty” and two covers, “Born to die in Berlin” by Ramones and “Freelance Fiend” by Leaf Hound). Self producted and self recorded, this first homemade work raise the attention of a website specialized in stoner-rock music, Perkele.it, which publishes a really good review.

Exept for a restricted number of gigs in 2008, Doctor Cyclops’ live activity starts in the early 2009. In the may of the same year they share the stage with Bill Steer’s Firebird, for whom they open the act on the first show of their “Italian Tour of Fire”.

In the same period they record two more original songs, “My Revolution” and “Angel Saviour in the Cannibal House” and release them in a self producted single which raises the attention of an english site, thesleepingshaman.com, which publishes another great review exalting the band’s seventies groove. http://www.thesleepingshaman.com/reviews/album/doctorcyclops.php

In the summer of 2009 Doctor Cyclops hit the studio to record a tune for a film soundtrack. Their song “Silver Serpent” is included in the soundtrack of the italian edition of the film “Megiddo: The Omega Code” (in Italy “2012 L’avvento del male”) by 20th Century Fox, released in november. At the same time they keep on working together with bands from the italian and european underground scene such as Stake off the Witch, Matra, Phased, Black Cargo, Sidharta, with who they share a tour in northern Italy in 2009, and Last Barons (who they follow on their last italian tour dates).

In november 2010 the band gained his first abroad experience playing some shows in Germany in occasion of the releasing of his first self producted Ep. Simply called “The Doctor Cyclops”, the cd collects all the five original songs recorded by the band untill now plus a live bonus track. In April 2011 the band took his first european tour through France and Belgium, opening the act for canadians Blood Ceremony in Paris. In the summer they record their first full lenght which will be released in the early 2012 through the german label World in Sound. The ending of 2011 sees the band keeping his touring commitments, with gigs through Austria and in the UK.

Todays tune "Angel Saviour in the Cannibal House" is taken from the latest release "Oscuropasso" (2014, World in Sound).

Shot like a 70s horror film, the video is a great introduction to the atmosphere and grooves of the album. Enjoy!

Sorry no Spotify yet, will update on release!