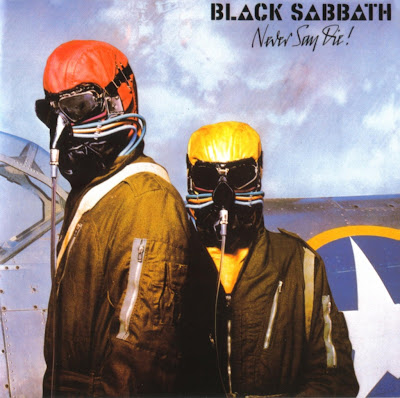 New week, new album to present. This time there will be no new record, but an old and dusty one, a record that received a lot of beating once it arrived.

The album I'm talking about is "Never Say Die!", the eighth studio album by British heavy metal band Black Sabbath, released in September 1978. It was the final Black Sabbath studio album to feature vocalist Ozzy Osbourne prior to his departure from the band in 1979.

At the time of the recording of Never Say Die! the members of Black Sabbath were all heavily involved in drug and alcohol abuse. Prior to the recording of the album, vocalist Osbourne quit the band and was briefly replaced by former Savoy Brown and Fleetwood Mac vocalist Dave Walker. Some songs were written with Walker, and the new group even performed an early version of "Junior's Eyes" with different lyrics on the BBC programme, Look Hear. Osbourne eventually rejoined the band, refusing to sing any of the songs written with Walker. These particular songs were rewritten, including "Junior's Eyes", rewritten to be about the then-recent death of Osbourne's father.

The album was recorded at Sounds Interchange Studios in Toronto, as were parts of Technical Ecstasy. Closing track "Swinging The Chain" features lead vocals from drummer Bill Ward, necessitated by Osbourne's frequent absences from the studio and inability to perform due to substance abuse.

The sleeve was another by Hipgnosis and the US and UK releases differed slightly in the faint images of British military pilots seen in the sky. The inner-bag featured graphics in keeping with the sleeve and credits, but no lyrics. The airplane on the cover appears to be a North American T-6 Texan.

Osbourne has criticized the album and the decision to record it in Toronto, telling After Hours in a 1981 interview "The last album I did with Sabbath was Never Say Die and it was the worst piece of work that I've ever had anything to do with. I'm ashamed of that album. I think it's disgusting". He went on to claim that the band flew to Toronto in January during sub-zero temperature "purely because the Rolling Stones had recorded a live album there..." Only three songs from the album were performed live during the tour in support of it, and dropped from subsequent set lists. Chart positions and singles

In the UK the title-track, released well-ahead of the album and the band's first UK picture-sleeve single, reached #21 in the chart and gave the band its first Top Of The Pops appearances since 1970. The band twice appeared live in the studio, miming to the song. One of these appearances was included on the official The Black Sabbath Story Vol. 1 - 1970-1978 video release, in a poor b/w transfer from a fan's off-air archive, despite the BBC holding both appearances in their archive.

In the UK "A Hard Road" was released as the second single from the album and reached the UK Top 40, 25,000 copies being pressed in a limited-edition purple-vinyl. There was no picture-sleeve release. 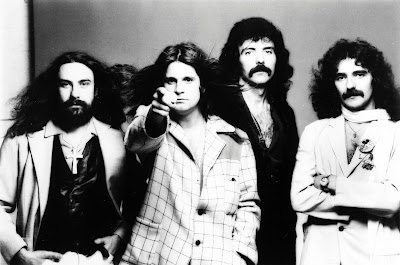 The music on "Never Say Die" is a mixed bag, where Sabbath exploring a new musical ground. The classic heaviness is not so very clear here,  as the focus is set on a little more classic rock. Nothing wrong with that at all when you listen to this today. Here it is played anywhere from a few ballads to experimental jazz. All of the aforementioned songs are fine compositions, even if some songs are a little bit odd and not keeps the high "Sabbath" standard. But if one approaches the album with an open mind, and enjoys the music rather than focusing on the fact that this is the original lineup's swansong, one will find much variety to enjoy here. 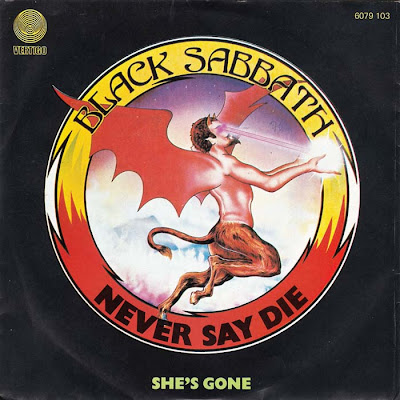 Todays tune "Never Say Die" is the title track from the 1978 album of the same name.

It was the last single Black Sabbath wrote with singer Ozzy Osbourne, who left the band and went on to a successful solo career, until 1998's Reunion. Osbourne actually left the band before Never Say Die! was released, but came back to record this album. It's one of the only three songs off the album to ever be performed live.

The band collectively chose the title as a phrase that summed up the previous ten years of their lives. It deals with never giving up. This is commonly cited as ironic, because Osbourne left the band again after the album's release.


A little bonus for today is a little clip with Rick Rubin on Producing Black Sabbath's New Album, '13'