Avantasia - Dying For An Angel 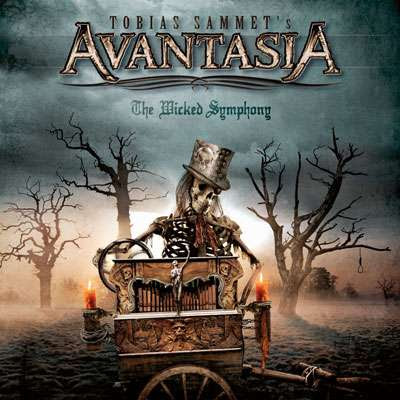 Avantasia is a heavy metal project created by Tobias Sammet, vocalist and frontman of the group Edguy. The project's title is a portmanteau of the words "avalon" and "fantasia" ("fantasy") and describes "a world beyond human imagination" (a quotation from the booklet). The project consists of a self-titled single, two full-length albums with the subtitle The Metal Opera, two EPs called Lost in Space, and the Scarecrow trilogy comprising of The Scarecrow, The Wicked Symphony and Angel of Babylon.

In the fall of 2009, Sammet announced the release of two new albums, The Wicked Symphony and Angel of Babylon, to be released on April 3, 2010. The story is set as a continuation of The Scarecrow. Some of the special guests include: drummers Eric Singer, Alex Holzwarth and Felix Bohnke, keyboardist Jens Johansson of Stratovarius, as well as vocalists Michael Kiske, Bob Catley, Jørn Lande, Tim "Ripper" Owens, Klaus Meine, Russell Allen, Andre Matos and Jon Oliva.

After a crazy week with lots of music, now I have the time for browse thru the gigs to offer you some lovely little stories and some pictures and most importantly the music. First up will be what I experienced on Sunday, a bit late but, better late than never. 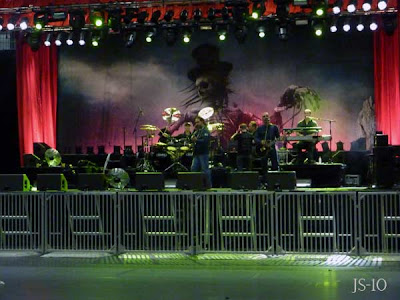 Soundcheck - Avantasia
That Sunday, would become such a musical feast was something I had not really expected. It was two concerts at the same time at Fryshuset here in Stockholm. Upstairs at Arenan was the place for Avantasias full strength, with Tobias Sammet (Edguy) Jorn Lande (Masterplan), Bob Catley (Magnum), Michael Kiske (Helloween), Amanda Somerville (Aina, Kiske / Somerville), Kai Hansen (Helloween , Gamma Ray), Oliver Hartmann (At Vance), Felix Bohnke (Edguy), Sascha Paeth (Heaven's Gate), Miro (Angra, Kamelot, Heaven's Gate) and Robert Hunecke-Rizzo. (Luca Turilli, Kamelot, Heaven's Gate)
Down at the Klubben, it was a completely different caliber of music. The Klubben had a nice visit from mangling bands Soilwork, All That Remains, Caliban, Naer and Bleed From Within. Some of these we will go thru in the coming days. 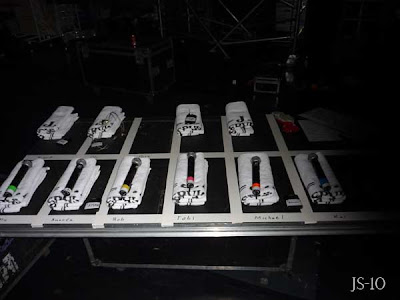 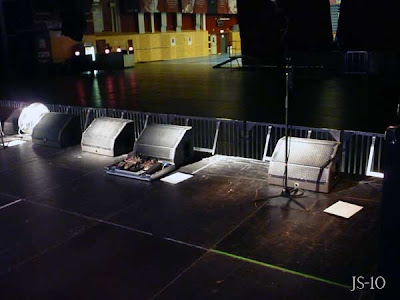 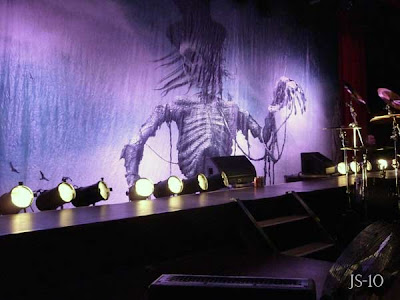 The evening included a lot of running stairs to see and hear everything, so a complete review will I not give, but you can read Mats Manhammars lyrical stay at the Arenan at WeRock here. 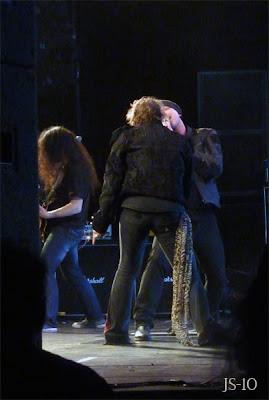 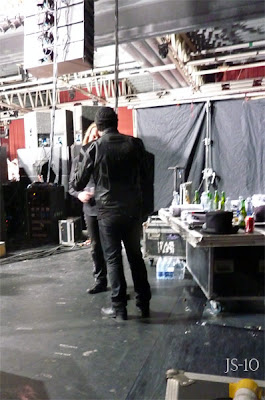 All the singers were stamped with very high quality, even the forever young Bob had his pipe in good condition. Tobias did worried a bit for the evening about his voice, not once it has gone wrong, he has been sick everything when he crosses the border to Sweden, is there anything "Cursed" with Sweden that does this, laugh Tobias. He did his best to keep in shape for the evening and I think he did a pretty good job on stage and he was actually quite pleased with his work and it was certain that he was in a great mood. Which turned out every now and then backstage when he shared his Swedish phrases he learned from a Swedish singer, who ... haha, you may guess who it might be. :) Some of the phrases read as follows.

Du är en vacker sköldpadda. (You are a beautiful turtle)
Du är en slemmig rymdvarelse. (You are a slimy alien)
Jag vill stoppa upp 100 kg smör i ditt arsle. (I want to put up 100 kg of butter in your ass.)
Jag vill köra in 100 meter taggtråd i ditt urinrör.(I want to run up 100 yards of barbed wire in your urethra.)

Talk about the humor was on top, Bob was double folded in laughter of these and Tobias promised that he would teach him some German phrases that he could tell when the tour arrives to Germany. As the content of these we will not go into. 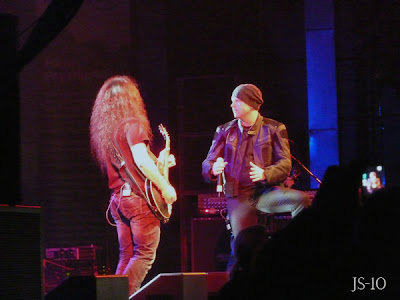 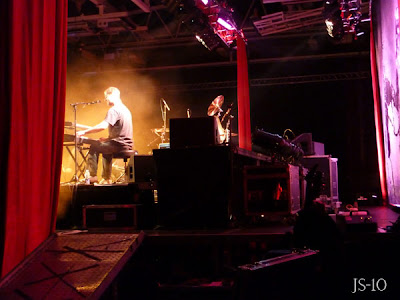 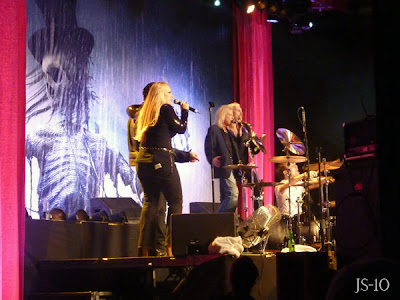 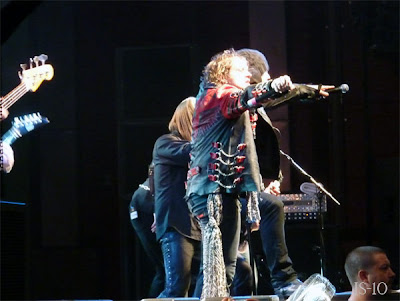 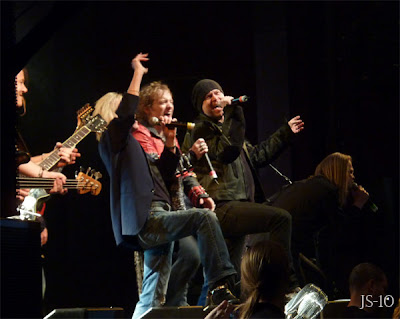 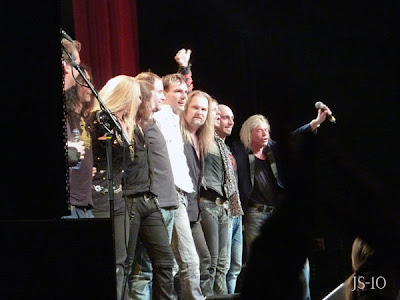 Jorn Lande, the Norwegian party man, who is always nice and happy and is gladly to share tips and tricks in terms of his skills in singing, even the occasional anecdote was told. Michael Kiske, although he is nice, but a bit reclusive, he was the first to sneak out of the Arenan to get to the hotel and catch up his sleep loss. Kai Hansen, haha he is really a cool guy, this time he managed to oversleep for a photo session that would be just before the gig. But once he got up on stage, with the hat and cane, then Kai gave 100%.

Amanda, the great lady with the big voice, sang like a goddess. For the real enthusiast of this band, it was truly a magical evening consisting of a string of songs that were played (See Setlist below) and the concert ended with a joint performance of the song Sign Of The Cross and the Seven Angels.

Avantasia makes eleven stops during december on this tour and visit countries such as Sweden, Switzerland, Germany, Japan, Mexico, Brazil, Argentina and one last show at the summer when they visit the Wacken Open Air.

And for last i have some extra goodies, some pictures taken by my friend Michael Johansson, enjoy these lovely shoots! 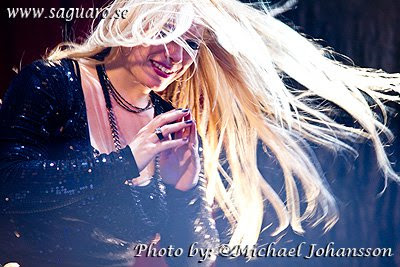 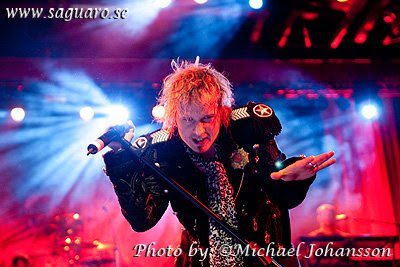 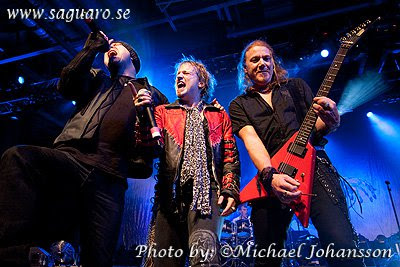 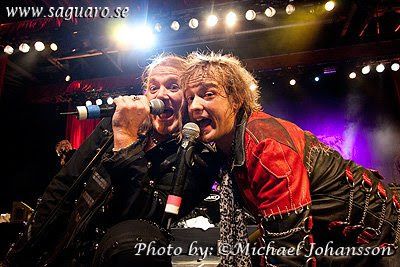 Photo by: Michael Johansson
Today's Tune Of The Day "Dying For An Angel" from "The Wicked Symphony" that is original sung by Klaus Meine (Scorpions) but live he is replaced by Michael Kiske as he does in a brilliant way.

Listen to "Avantasia - Dying For An Angel" on Spotify here!