Angel - Can You Feel It 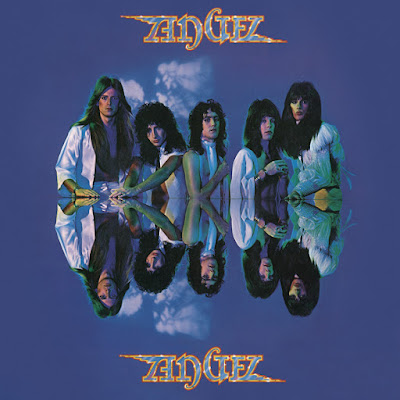 "Can You Feel It" is a tune taken from the third album "On Earth as It Is in Heaven", by the American rock band ANGEL. It was released 1977 on Casablanca Records. It is the last album with Mickie Jones who had been the band's bass guitar player since its formation. It was produced by Eddie Kramer (KISS/Jimi Hendrix) and recorded in an actual castle in the Hollywood Hills. It marked a shift from progressive and symphonic hard rock to a more mainstream hard rock approach, with the exception of "Cast the First Stone" and "Just A Dream" which are very similar in sound to the songs on the albums "Angel" and "Helluva Band". In fact, "Cast The First Stone" was written during the Helluva Band sessions. The band toured non-stop and it was during this time they made their only tour of Japan. 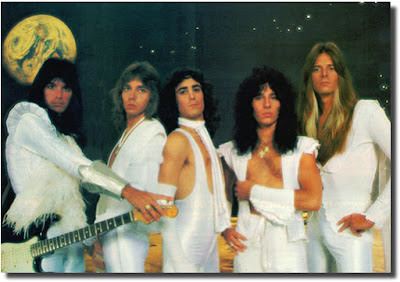 Lovember Records reissued On Earth... in a digitally remastered limited edition in August 2008. It included a 16-page booklet with liner notes by the journalist Dave Reynolds (Classic Rock magazine and Kerrang), a track-by-track run down by the singer Frank DiMino, all lyrics and previously unreleased photos. The LP originally contained a symmetrical poster of the album cover.

ANGEL is a Glam Rock and heavy metal band from Washington, D.C., formed in the mid-1970s by Punky Meadows and Mickie Jones. They were signed to Casablanca Records, and had the image of dressing in white.

ANGEL was discovered by Kiss bass player Gene Simmons performing at a nightclub and was eventually signed to the same label as KISS, Casablanca.

ANGELs image of dressing in all white was a deliberate contrast to KISS, which wore black. ANGEL sported an androgynous image and elaborate stage sets. They were slammed by rock critics, and Frank Zappa ridiculed the all-male band’s female appearance in the song “Punky’s Whips”. ANGEL never achieved mass commercial success but acquired a following as a cult band.

Their first album was the self-titled ANGEL and consisted of guitarist Punky Meadows, bassist Mickie Jones, vocalist Frank DiMino, keyboardist Gregg Giuffria, and drummer Barry Brandt. This lineup would hold for the following two albums, Helluva Band and On Earth as It Is in Heaven, after which Jones would be replaced by Felix Robinson.

They made an appearance in the film Foxes and Frank DiMino sang “Seduce Me Tonight” on the Flashdance soundtrack.

DiMino and Meadows departed the band in 1981, and the remaining members brought in vocalist Fergie Frederiksen (later of TOTO) and guitarist Ricky Phillips (later of THE BABYS, then BAD ENGLISH, then STYX), but this lineup dissolved shortly thereafter. 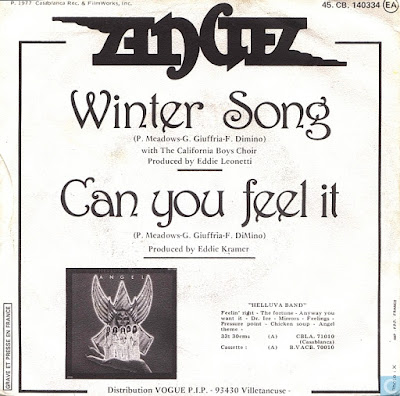 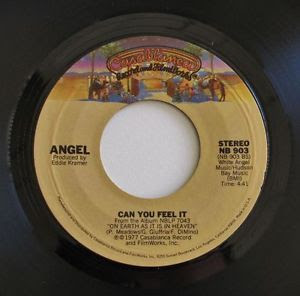 Todays tune "Can You Feel It" is taken from the 1977 record "On Earth as it is in Heaven". Was also released as B-Side on the "Winter Song" single.

Listen to ”Angel - Can You Feel It" on Spotify here!