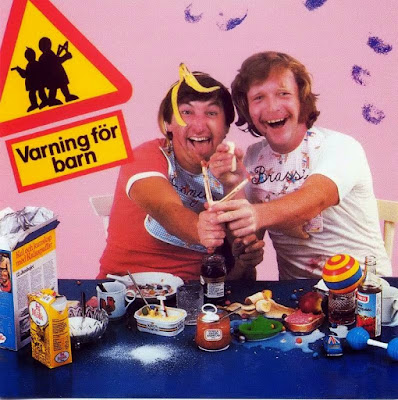 Sunday, totally exhausted after a weekend at the Gärdet and the Summerburst Festival. A weekend with "dunka dunka" makes a completely depleted, a musical style that I'm not really that comfortable with but it was just a job, it is sometimes. But on the whole it was actually really fun and instructive.

Today's classic will be more a tribute to two/three Swedish actors. When I was a kid a long ago, I grew up with "Fem myror är fler än fyra elefanter or Fem myror" (Five ants are more than four elephants), a Swedish TV-series for children, hosted by Magnus Härenstam, Brasse Brännström and Eva Remaeus. The TV-series included songs and sketches with education about letters, numbers, positions (right, left, under, above, etc.), etc. Fem myror är fler än fyra elefanter was broadcast first on 19 November 1973 on TV2 by Sveriges Television and it was also broadcast as Sveriges Television's Christmas calendar 27 November –24 December 1977. The show was replayed during the late 70's and 80's.

Besides entertaining children, Magnus ("a pedant"), Brasse ("a slob") and Eva ("a proper person") wanted to make children interested in letters and numbers and every program (running time, ca 30 min) had 1 letter and 1 number as a theme.

Yesterday the last of this trio left this earth, R.I.P Magnus, R.I.P Brasse, R.I.P Eva! So today we pay a tribute to them and choose a tune in Swedish. 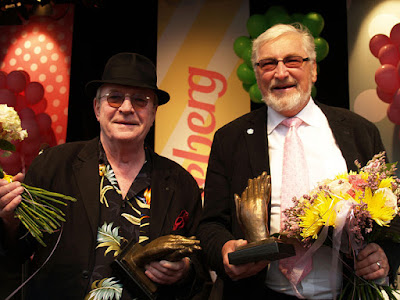 Magnus: Johan Herbert Magnus Härenstam (19 June 1941 - 13 June 2015) was a Swedish television host, actor and comedian. Härenstam hosted the Swedish version of the game-show Jeopardy! for 14 years before being replaced by Adam Alsing. Härenstam is also known for hosting the children's TV-program Fem myror är fler än fyra elefanter (with Brasse Brännström & Eva Remaeus), which was very popular and has been re-broadcast numerous times since it first aired. Härenstam participated in the music video for ABBA's hit song "When I Kissed the Teacher" where he played the teacher who got kissed by Agnetha Fältskog. Well known in Sweden for several decades, he was almost equally popular in Norway, having starred in the 1990s sitcom Fredrikssons fabrikk, playing the Swedish boss of a Norwegian textile workshop.

Härenstam died on 13 June 2015 after a several year long fight with cancer.

As young Brännström attended Adolf Fredrik's Music School in Stockholm. He became famous through TV together with Magnus Härenstam and Lasse Hallström, in 1970 they made their first TV-program Oj är det redan fredag. During the 1980s, Brännström managed Maximteatern in Stockholm together with Härenstam, Lill Lindfors and Aller Johansson; their company was called Limabrall.

Born in Lund, Remaeus starred in the Swedish film Sven Klangs kvintett, the thriller The Man on the Roof, as well as the child television series Fem myror är fler än fyra elefanter.

Todays tune "Flygkaptenerna" is taken from the record "Varning för barn (Warning for children)". It was a bar show with the Swedish show and humor group and Magnus & Brasse made in 1976 on Restaurant Trädgårn in Gothenburg. The show was recorded and released on a sound album 1976. In 2009 the show on DVD along with it is served.