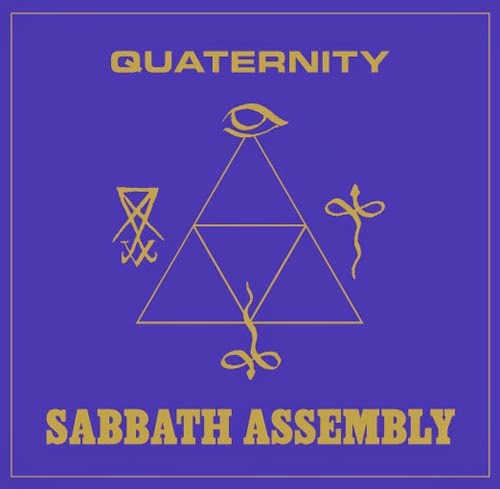 New week and it's time to reveal "Record Of The Week". Sabbath Assembly returns with another set of religious themes on their third album Quaternity.

What is missing from the Christian concept of “trinity”? Carl Jung suggests that the fourth element is what many reject – the evil in our nature; or by another view, the feminine, which throughout Church history has been equated with evil and duly suppressed. To restore this element to the trinity creates Quaternity, which in William Blake’s Proverbs of Hell represents “the fourfold nature of man and his relationship to the divine.”

Quaternity is primarily acoustic in format, with an array of classical percussion and strings creating an entirely new sound for the band. Unlike its predecessors Restored to One and Ye Are Gods, Quaternity offers a majority of original material with inspiration from the Process found primarily in the lyrics.

Side A of Quaternity the album begins with a look at the four deities worshipped in the theology of the Process Church of the Final Judgment -- Christ, Jehovah, Lucifer, and Satan –each tune providing the deity with its own voice, unmediated by Christian prejudice. Lucifer is again the light bearer, Satan the source of primal strength, Jehovah the vengeful destroyer, and Christ the master of death.

Side B explores another four: the horsemen of the apocalypse of Revelations. This intricate, sidelong piece was conceived in anticipation of 12/21/12. For those who got the 7” last year, this is the full 20-minute version.

Quaternity once again features Jamie Myers on vocals and Dave “Xtian” Nuss on percussion. Special guests on the album include Daron Beck of Pinkish Black accompanying Jamie on vocals, Kevin Hufnagel of Gorguts on guitar, Mat McNerney and Marja Konttinen of Hexvessel reciting sacred texts, liturgical chanting by Jessika Kinney (Sunn 0))), Wolves in the Throne Room), bass from Colin Marston of Behold… The Arctopus, and organ from “Nameless Void” of Negative Plane. 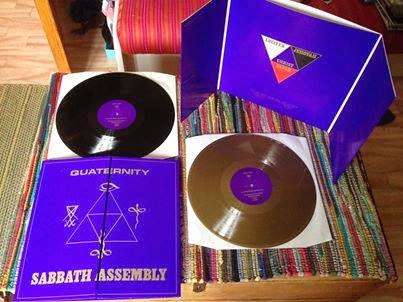 The intention of Sabbath Assembly is intention is to provide moving and transformational music for the current generation. The band began in 2009 as interpreters of the hymns of the Process Church of the Final Judgment, a religious movement based in the UK and US that came and went in the 60′s and 70’s period of spiritual awakening. The stance of the band, and its interpretation of Process teaching, is that neither good or evil can be fully repressed; therefore embracing both sides in balance brings the most satisfaction and peace. Considering this, they each have a personal responsibility to attend to both in their light and shadow sides, their passion and their imagination. Conformity, or “the way of the Grey,” has no place in Processean individuation of the Self.

The three Processean deities, Jehovah, Satan, and Lucifer, represent important aspects of themselves to be celebrated — duty, rebelliousness, and an unbridled joy for life. The Christ archetype allows us to see these as whole rather than in conflict, unfolding “a path of vision and reality, sometimes painful, and always intense.” –The Gods and Their People 1.13

Todays tune "I, Satan", is the heaviest track on the album, the tune have a doomish touch with a great hard atmosphere. The tune is taken from the Record Of The Week "Quaternity" Available on Svart Records, Relesed on March 28, 2014

Listen to "Sabbath Assembly - I Satan" on Spotify here!