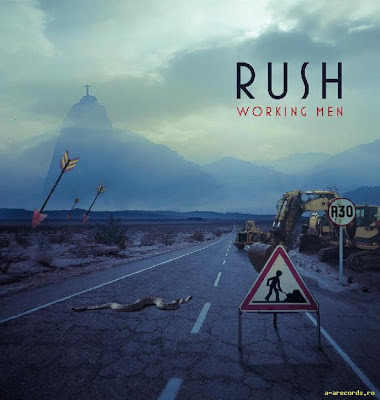 So a band that was played pretty often during this evening was a band called Rush, so a tune with them suites fine today.

Working Man is a song by rock band Rush from its debut album, Rush.

The middle of the song features an extensive instrumental jam with two guitar solos by Alex Lifeson, and freestyle bass playing by Geddy Lee. It was voted 94th in Guitar World magazine's list of the 100 greatest guitar solos.

Donna Halper, then a disc jockey and music director at WMMS FM in Cleveland, Ohio is credited with getting Rush noticed in the United States by playing "Working Man" on the air. The song proved particularly popular in the working-class town. The response resulted in a record deal for the band, which gave her special thanks for her part in their early history and dedicated their first two albums to her.

The song features the band's original drummer and co-founder, John Rutsey, who was replaced by Neil Peart. On the 1976 live album All the World's a Stage, the song segues into "Finding My Way" and one of Neil Peart's drum solos.

Todays tune is taken from the debut album with Rush, but the Video is filmed during the Time Machine Tour!