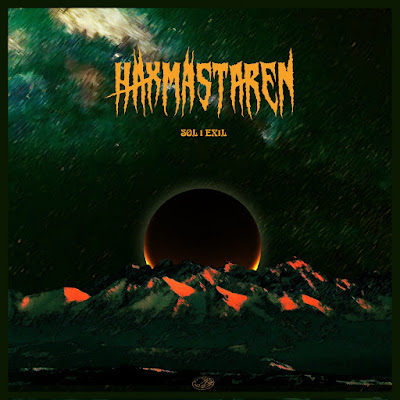 Monday, new week, time for us to hail a album with "Record Of he Week".

HÄXMÄSTAREN, the Gothenburg’s stoner/doom/sludge behemoths serves us with a release of their explosive sophomore album "Sol I Exil"! 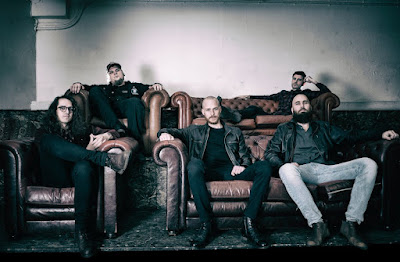 HÄXMÄSTAREN is from Gothenburg, Sweden formed in early 2017. Debut album "Haexprocess" was released in 2018, and the band self released the follow up, "Sol I Exil" in March 12, 2021 and then they signed a deal with the Swedish Majestic Mountain Records for a proper release, the Vinyl got shipped in the end of August, where the wax came in a wicked, transparent gren and yellow haze. Almost looks like an eye of a "HÄXMÄSTARE", lol. 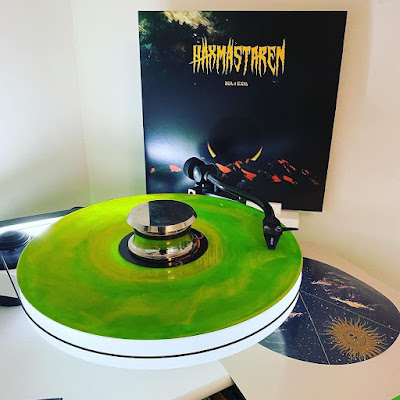 "Sol I Exil" is a flaming sledgehammer of stoner doom and blackened sludge, walking the thin line between blackened sludge and traditional heavy metal. Already from the opening tune "Blood Moon" they serve us with banging hard with breakneck riffage, whiskey soaked vocals that at times gets terribly angry, spits and hisses, the end result is brilliant. "Millennium Phenomenon" is a fablous piece with rumbling bass line and thundering drums along with some ferocious guitar playing, and serves us with a hypnotic guitar riff and searing solos that makes me cringe. "Wavelurker" and "Growing Horns" shows the blackened side of the band, here the musical influence palette gotten some more choices, where the mix of selected ingredients are very wise. The metal is still thick as syrup and wonderfully crunchy on the blackened parts. Where in "Children Of The Mountain" they set fire on the blackened side, the guttural growls haunts out it's own extremities with a surging energy. Some sludgy doom roots in "Dödskult Ritual" and the title tune "Sol I Exil", where the lyrics are sung in their Swedish mother tongue. The later one closes the album with a swinging groove, with some doomy vocals that burst out to the hallowed howls of the damned, cleavery musican ship between the members serves us marvelous drumming, clear and distorted bass and a bautiful guitar handeling. "Sol I Exil" is a marvelous album, highly recomended.

Sum: "Sol I Exil" is a top notch doomy piece that you can't miss!

Today's tune "Sol I Exil", the title tune from the new album, enjoy!

Listen to ”Häxmästaren - Sol I Exil" on Spotify!