King Buffalo – The Burden Of Restlessness 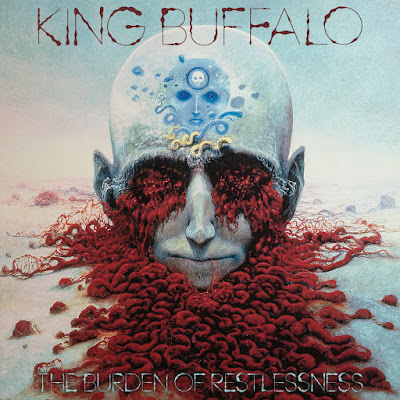 Monday, time to present "Record Of The Week".

The Rochester trio KING BUFFALO is havening a boom in the creation cabbin, last year we got the 2020 release "Dead Star". And as far as the rumours says this new release "The Burden Of Restlessness" is the first of three that we are going to get this year.

"The Burden Of Restlessness" was written over the course of what most would consider a pretty stark and stressful time period. The end result is our darkest, most aggressive, and most intimate work to date. We are extremely proud of what this record became.” – Sean McVay 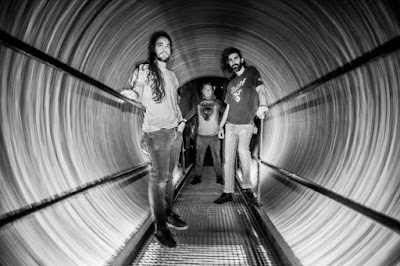 The trio of Sean, Dan, and Scott have once again created a marvlous piece of art on "The Burden Of Restlessness". It's a powerful concoction of heavy psych, blues, and stoner rock in stunning cohesion.

The album opens up with "Burning", where the rythm section of the bassist Dan Reynolds and drummer Scott Donaldson that build up the space until the light guitar plink by vocalist/guitarist Sean McVay and the clear and impressive bass riffs creats something so simple and so magnific. The vocals feels incredibly comfortable and is just right in the mix. "Hebetation" is a groovy piece with a popish prog attitude along catchy lyrics and some electronica to boost up things. The electronic addons continues in the trippy piece "Locusts". "Silverfish" is a an intressting tune, some nice twincles that increases during the journey along with Sean smooth vocals. Half way thru the riffs gets heavier and heavier even the singing becomes more strained. The funky "Grifter" is a relly cool tune that burst up from time to time. "The Knocks" shows a little more beep and spout in the guitar in a very nice flow where the thoughts go away and pat Genesis and Frank Zappa on the shoulder. An amazing guitar playing in the end of the tune. The album closes up with "Loam", hand pick intro in an ambient environment with smooth vocals and really beautiful bass playing. Halfway thru that tune burst out with some heavier layout and some incredible guitar playing.

Sum: "The Burden Of Restlessness" is clever and marvelous made piece of music, it soft and smooth and in the same time hard and heavy. This is an album for any atmospheric psychedelic heavy rock fans out there. Get it!

"The Burden Of Restlessness" was released June 4, 2021. Written and recorded by KING BUFFALO in Rochester, NY at the Main Street Armory in December of 2020 & January of 2021. Produced, Engineered and Mixed by Sean McVay. Mastered by Bernie Matthews. Artwork by Zdzisław Beksiński, Cover Fonts by Mike Turzanski, Layout by Scott Donaldson

Today's tune "Silverfish" is taken from "The Burden Of Restlessness", enjoy!