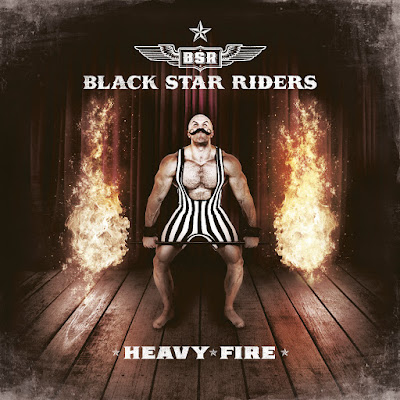 Monday, new week, time to introduce ”Record Of The Week"

"Heavy Fire" is the third studio album by hard rock band BLACK STAR RIDERS, released on February 3, 2017. BLACK STAR RIDERS evolved from the touring version of THIN LIZZY, assembled by guitarist Scott Gorham after the death of THIN LIZZYs leader Phil Lynott. The band's first two albums "All Hell Breaks Loose" and "The Killer Instinct" were released in 2013 and 2015 respectively.

The band formed in December 2012, when members of the most recent line-up of THIN LIZZY decided to record new material, but chose not to release it under the THIN LIZZY name. While THIN LIZZY will continue on an occasional basis, BLACK STAR RIDERS is a full-time band, described as "the next step in the evolution of the THIN LIZZY story". 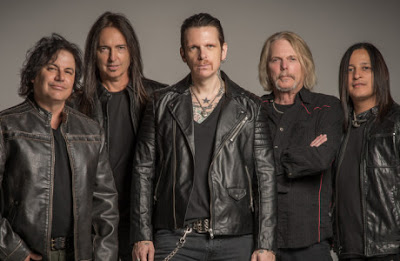 The album was Recorded at Rock Falcon Studio in Nashville. Produced by Nick Raskulinecz, who's known for the densely layered, muscular sound he has brought to albums by ALICE IN CHAINS, DEFTNESS, EVANESCENCE and MASTODON.

"Heavy Fire” follows the same charted path as the previous albums, it’s a is a delightful release of great melody and duelling guitars of Gorham and Johnson. The album spins like a cat on the turntable, great swinging with classic raw power. It's heavy bluesy, excellent slinky riffage, marvellous singing and 10 catchy tunes. All from the bluesy title track to the vintage guitar tune "Dancing with the Wrong Girl" and "Testify or Say Goodbye", the heavy and raw "When the Night Comes In", "Who Rides the Tiger" to the half pace "Cold War Love" and "Fade", yes the tunes will evoke THIN LIZZY from time to time, but still this is something different, the band has really succeeded to manage the past without stepping in the wrong hole and this certainly is something you should get, ok!.

Summary: "Heavy Fire” is a fresh rock album with a good-old-grey legacy.


The album has been marketed via PledgeMusic, and its release will be followed in March 2017 by a full UK tour supported by GUN with THE AMORETTS and BACKYARD BABIES sharing the opening support slot.

The first single from the album, "When the Night Comes In", was premiered on Planet Rock radio on November 15, 2016. The follow-up single and today’s tune "Testify or Say Goodbye” was first played on BBC Radio 2 by Ken Bruce on January 5, 2017.

"Dancing With the Wrong Girl" and "Cold War Love" are the first BLACK STAR RIDERS songs to feature bassist Robbie Crane credited as a composer. Heavy Fire is Crane's second album with the group.

"Letting Go of Me" is the first BLACK STAR RIDERS song not to be co-written by Damon Johnson.