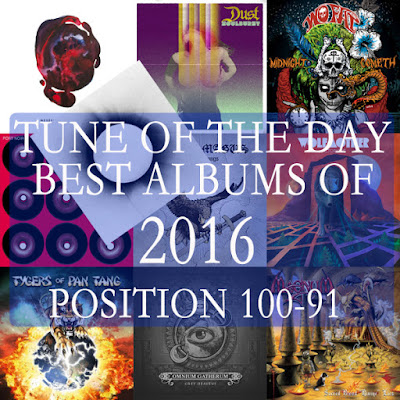 Now we almost reached the end of this year, it's December 12th and around this time of the year it's time to sum all the best that 2016 have given us.

Once again it has been a really good year album wise. More than shit loads of money have been spent on records this year, all of them is now going to fight for the top spots on Tune of the days Top 100 list, yes top 100 this year :) It's freaking crazy, but I had really, I mean really hard to choose this year, to many good records have been released. But after some hours of agony, my music heart have decided and now when I look at it, it was not quite what I had expected from the beginning, but what the heck it's my choices and hope that some records might hook you up, might even find a few new favourites and that you buy a few of them to support the artists that have put all their soul into the creation of all the wonderful tunes that serves here. Another thing that I notice that It's pretty heavy this year, not many outsiders that usually slides in here and there.

First up we present this year's best albums between 100 - 91. Where you get the first 10 at once. Today's tune will be publish later on this evening. So here we go!


ARCHITECS have managed to craft a sound that sounds like them and this is their strongest release so far.


An album that is full of emotions and pretty atmospheric.


The 7-th album from the Finish rockers, an album that needs to be consume as a complete package to magic, bit's and pieces it will fall into the shadows.


Another great album from MAGNUM, and quite easily to listen to.


Even if the machinery is running at half-mast, GRAND MAGUS can kick ass.


Midnight Cometh is a further proof that patience is a virtue.


The self titled album of TYGERS OF PAN TANG has everything you want from an old-school record.