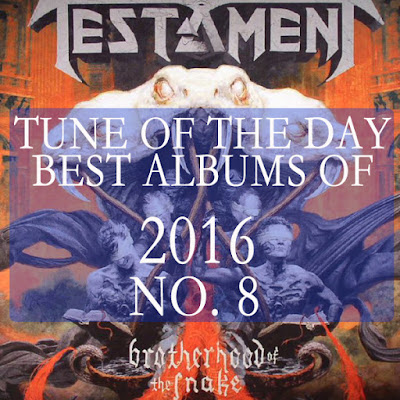 "Brotherhood of the Snake" with TESTAMENT reaches position 8th on the Tune Of The Day's Top 100 of the Best Albums 2016.

"Brotherhood of the Snake" is the eleventh studio album by American thrash metal band TESTAMENT, released on October 28, 2016. It is the band's first studio recording with bassist Steve DiGiorgio since First Strike Still Deadly (2001). "Brotherhood of the Snake" also marks Testament's fifth collaboration with Andy Sneap, who had mixed and engineered all of their albums since The Gathering (1999) and produced Dark Roots of Earth (2012). The album debuted at number twenty on the Billboard 200 chart, making it TESTAMENTs second highest charting album in the US after Dark Roots of Earth, which peaked at number 12 four years earlier. The album is a real beast and really kicks ass.

Listen to ”Testament - The Pale King" on Spotify!