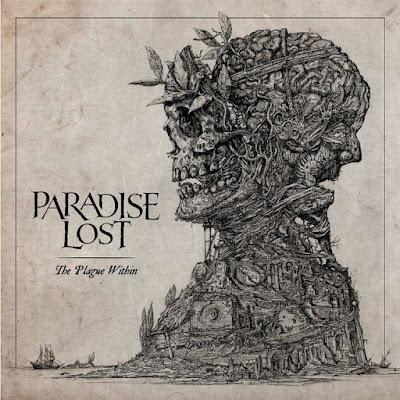 PARADISE LOST have released a new video "Terminal", the Video clip was produced and directed by Oliver Barth and filmed at a special fan event at the Forum, in Bielefeld, Germany on August 17, 2015.

PARADISE LOST are a doom metal band that formed in 1988 in Halifax, England and are considered by some to be one of the pioneers of the doom metal genre and of the gothic metal genre.

Their line-up has remained stable for such a long-standing heavy metal band, consisting of singer Nick Holmes, guitarists Greg Mackintosh and Aaron Aedy, and bassist Steve Edmondson. Holmes and Mackintosh are the principal composers, with almost all of the band's songs credited to them. During the years, the band has only changed drummers.

Today's tune "Terminal" taken from the 14th studio album "The Plague Within", released on 1 June 2015 via Century Media Records. This album shows the band returning to their death/doom roots, mixed with elements of the gothic metal direction heard on recent albums.