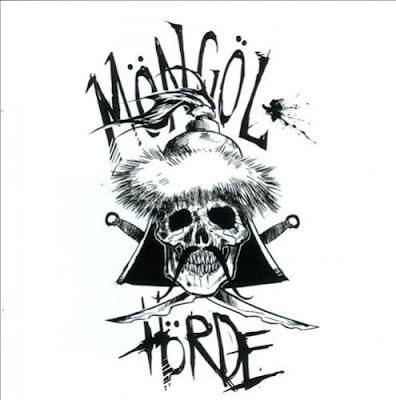 MÖNGÖL HÖRDE is an English hardcore punk band formed in 2012. The group features Frank Turner on vocals, Ben Dawson on drums and Matt Nasir on guitar. Turner and Dawson are both former members of hardcore punk outfit MILLION DEAD. Frank Turner is now best known for his solo folk-punk material, and Matt Nasir is part of his backing band, THE SLEEPING SOULS. Lyrically, MÖNGÖL HÖRDE is not as serious as Frank Turner's other projects, with Turner stating, "Lyrically it's very different from what I do now, it's kind of depraved. The first song we wrote is about Natalie Portman's tapeworm using her as a glove puppet to lead an uprising in Hollywood. We're writing a whole pile of new songs and we're going to do some live dates soon."

The band made their live débuts at free shows in London and Leeds in the two days before the band played on the Lock Up Stage at Reading and Leeds Festival.

Today's tune "Make Way" is taken from their self-titled debut album was released on 26 May 2014.