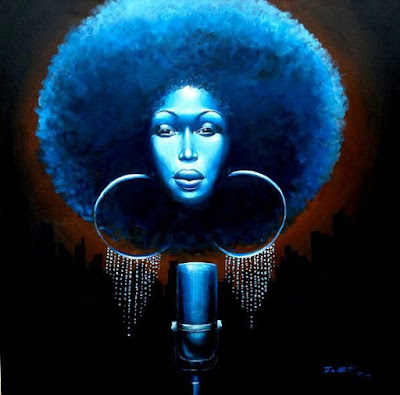 "Afro Blue" is a jazz standard composed by Mongo Santamaría, perhaps best known in its arrangement by John Coltrane.

Mongo Santamaria first recorded his composition "Afro Blue" in 1959, when playing with Cal Tjader's band, Cal Tjader Sextet - Concert by the Sea, Part 1 (Fantasy). The first recorded performance of the piece, recorded live on April 20, 1959, at the Sunset Auditorium in Carmel, California, with composer Mongo Santamaría on percussion.

In 1960, lyrics were added by prolific songwriter Oscar Brown.

"Afro Blue" was the first jazz standard built upon a typical African 3:2 cross-rhythm, or hemiola. The song begins with the bass repeatedly playing 6 cross-beats per each measure of 12/8, or 6 cross-beats per 4 main beats—6:4 (two cells of 3:2). The following example shows the original ostinato "Afro Blue" bass line. The slashed noteheads indicate the main beats (not bass notes), where you would normally tap your foot to "keep time." While the bass sounds the six secondary beats, Paul Horn's flute solo and Emil Richards' marimba solo emphasize the four primary beats. Francisco Aguabella takes the conga drum solo on the first recording, quoting phrases from the vocabulary of the abakuá bonkó drum.

Using brushes, Willie Bobo plays an abakuá bell pattern on a snare drum. This cross-rhythmic figure divides the twelve-pulse cycle into three sets of four pulses. Since the main beats are grouped as four sets of three pulses (dotted quarter-notes in the top example), the bell pattern significantly contradicts the meter. Bobo played this same pattern and instrumentation on the Herbie Hancock jazz-descarga "Succotash. 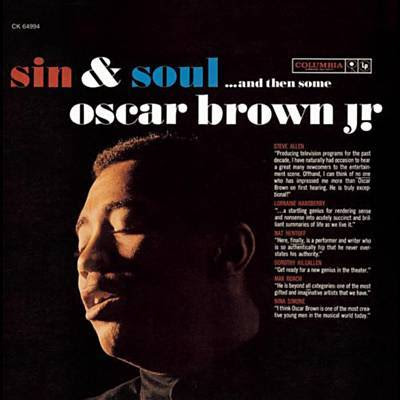 Oscar Brown, Jr (October 10, 1926 – May 29, 2005) was an American singer, songwriter, playwright, poet, civil rights activist, and actor. He ran unsuccessfully for office in both the Illinois state legislature and the U.S. Congress. Brown wrote numerous songs (only 125 have been published), 12 albums, and more than a dozen musical plays. 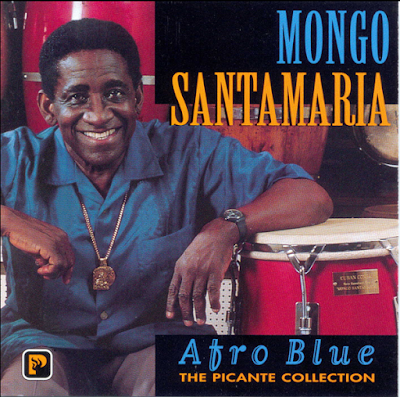 Ramón "Mongo" Santamaría Rodríguez (April 7, 1917 – February 1, 2003) was a rumba quinto master and an Afro-Cuban Latin jazz percussionist. He is most famous for being the composer of the jazz standard "Afro Blue", recorded by John Coltrane among others. In 1950 he moved to New York where he played with Perez Prado, Tito Puente, Cal Tjader, Fania All Stars, etc. He was an integral figure in the fusion of Afro-Cuban rhythms with R&B and soul, paving the way for the boogaloo era of the late 1960s. His 1963 hit rendition of Herbie Hancock's "Watermelon Man" was inducted into the Grammy Hall of Fame in 1998.

Mongo Santamaría was one of a handful of Cuban congueros ("conga players") who came to the United States in the 1940s and 1950s. Other notable congueros who came to the U.S. during that time include Armando Peraza, Chano Pozo, Francisco Aguabella, Julito Collazo, Carlos Vidal Bolado and Modesto Durán. Many consider Santamaría to have been the greatest conga drummer of the twentieth century.

Santamaría inspired the stage name of Japanese actor Yūsuke Santamaria. Additionally, his name is used as a pun in the film Blazing Saddles. When the character Mongo enters a scene, a Spanish-speaking peasant cries, "Mongo! Santa Maria!" before fleeing in terror.