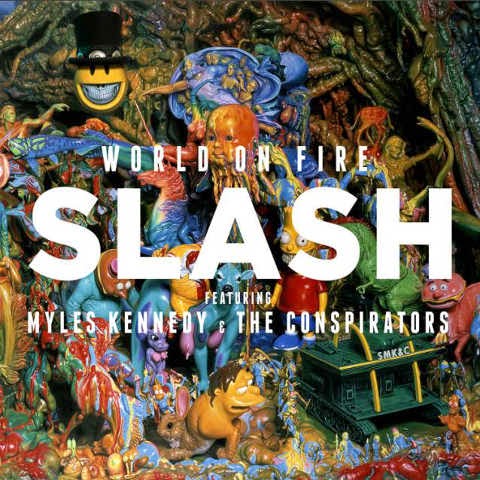 "World On Fire" is the title track and first taste of the new album from Slash (GUNS N' ROSES, VELVET REVOLVER) and his backing band, Myles Kennedy & The Conspirators.

"World On Fire" is the third album to be made available under the Slash solo banner, will be released on September 15 via Slash's own label Dik Hayd International distributed through Roadrunner Records (Europe, Middle East, Africa and Latin America).

The cover artwork for the "World On Fire" album was designed by American contemporary artist Ron English.

"World On Fire" will be made available four weeks in advance of the U.K. general release as a Classic Rock Fanpack, which consists of: * The full album * 116-page magazine featuring exclusive interviews with Slash, the band, producer Michael Baskette and cover artist Ron English. A Slash and Myles track-by-track breakdown. Exclusive pictures from the recording sessions as well as a brand new shoot, competition and much more. * Giant double-sided A1 poster * Metal pin badge

Slash told Music Radar about the new CD, "I wrote the majority of the music when I was on the 'Apocalyptic Love' tour. You know, just sitting around in dressing rooms and hotel rooms for a year, I accumulated all these ideas. Then in September [2013] I sat down and went through everything I'd recorded on my voice memo on my phone and picked out about 20 different ideas then we went into pre-production in October and just started jamming. We were there for a couple of months, holed up in Mates rehearsal studio in Los Angeles. There was the whole writing process then once we had all the songs down we rehearsed the shit out of it, and then we brought the producer, Mike Baskette, in. And so we went through another phase of fine tooth-combing everything and getting the arrangements together. Myles came down and started working on his vocal parts… and by the time we were done with all that we were ready to go in and just bang the stuff out. It was a very quick process in the studio."

He continued: "The one thing about this record is that it was almost like it wrote itself, it was very effortless. And that happens very rarely, when there's a certain energy that carries the creative process and it's almost like you're not in control of it and you just ride that wave. That's how this record was. I can't think of any outside influence other than just going with this creative flow."

Slash also spoke about the musical chemistry between him and his bandmates, telling Music Radar: "I think basically everyone's a great rock 'n' roll player. They're real rock musicians at heart — deep down. So when we get together, we've built up a certain chemistry. We started out with a certain kind of chemistry and we're just evolving from there. At this point, everybody feels very comfortable just being themselves and doing what it is that they do best. It's just an unsaid, natural synergy that happens. For example, this is probably one of Brent's [Fitz, drummer] best records as a player, being able to do all the things he wanted to do. And the same with Todd [Kerns, bass] and the same for me. But having such a great rhythm section means I have to really fuckin' put together some great guitar bits on top of it. The other thing that's cool is Mike Baskette was great. One of the reasons why I really wanted to work with him was he just loves guitars and it's rare to get anyone who brings any ideas other than the ones you bring to the table as far as sounds and tones or anything like that. And that's a limitation: you can only do as much as you know how to do in the studio and sometimes you really need to work with an engineer who knows something in the recording studio that you don't know. That's what Mike brought into it. He was so enthusiastic about getting guitar sounds. He would put as much time into that as I could possibly put it in — sometimes more so. It was really inspiring. I haven't had that in a long, long time." 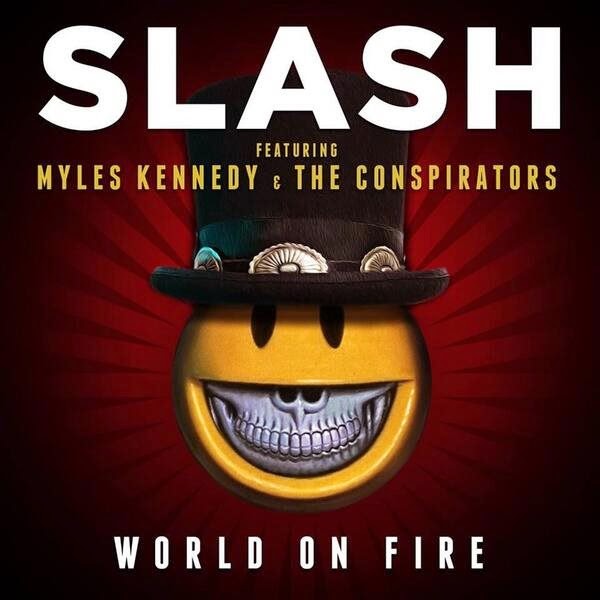 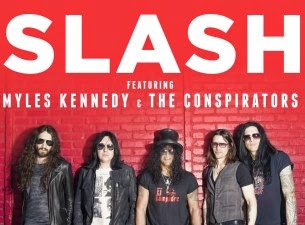 Todays tune "World On Fire" is the title track from the upcoming album. Enjoy!

Listen to "Slash - World On Fire" on Spotify here!