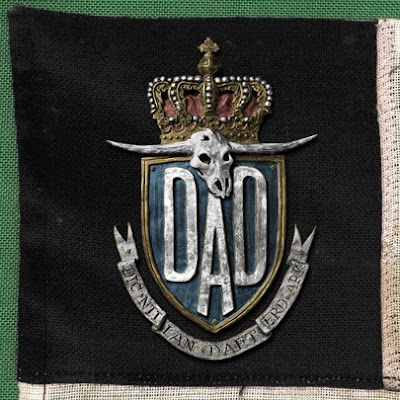 This week's "Record of the Week" album is Danish.

D-A-D is a Danish rock band previously known as "Disneyland After Dark", a name that had to be changed after a threatening lawsuit from The Walt Disney Company. Their style of music is often categorized as melodic heavy rock. They have also used the names D.A.D., D•A•D and D:A:D, each name representing a period in the band's history. 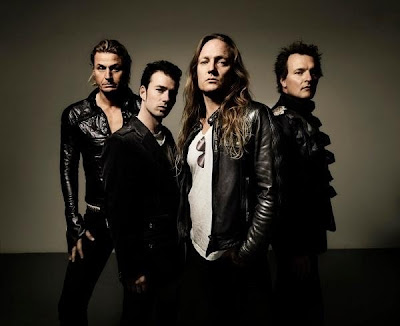 I've always liked the Danish's swing, sure they have had difficulty live up to the glory days but still managed to deliver some good albums and some mediocre once, but all with a high class.

Dic.nii.lan.daft.erd.ark, has indeed a lot to live up to. Their eleventh record sofar. I think this is pretty good. The album may seem muddy and somewhat meaningless at first. Listened a few times when it came out, ended up on the shelf, even started to collect some dust until I simply got hungry for a little D-A-D, that it then usually be that any of the classical records end up on the turntable, this time it was the latest instead and realized quite quickly that it was not that bad and now it has been spinning more than once and can not be more than this week's album :)

The record starts delightfully dirty with "A New Age Moving In". Even the first single "I Want What She's Got" is a really good track. The third track "The End" is classic D-A-D song, like these pieces they're really best at. There after, a lightweight before it gets heavy in the house again with "The Place Of The Heart". There are several good pieces on the album, such as "Breaking Them Heart By Heart", "Can not Explain What It Means" and "We All Fall Down", The last is a beautiful song with a real hook of melody which one goes whistling at and it is performed in a manner that only this band can. Music vise there is not much I can point on to, the singing are pretty worn, but that I can live with, these guys have been around for a while.

Can summarize this record on to state that Dic.nii.lan.daft.erd.ark. Is a really good album. You only need to give it some time.

The album was released on 14 november 2011 on Mermaid Records and Sony Music, and thus marks a break with EMI after several album releases on the record company since the early 1990s. The first single, "I Want What She's Got", was released on 30 September 2011. The album debuted at number two on the charts, surpassed only by Rasmus album Mer 'than love, which is the first time since the 1997 album Simpatico to a studio album from the band has not gone straight to number one. The album sold 4,846 copies in its first week. In december album received platinum for 20,000 copies sold.

DIC.NII.LAN.DAFT.ERD.ARK produced by Nick Foss, who also were behind albums like No Fuel Left for the Pilgrims (1989) and Everything Glows (2000). On his work with producer says lead singer Jesper Binzer "Nick loves songs, and we have many of this time. and it's cool when his pop ears respond to our hard-hitting songs." On the audio side, the difference compared to previous albums, according drummer Laust Sonne, "that we sound like a rock quartet. Neither more nor less. It is clean, tight and cash."

Todays tune "We All Fall Down" is taken from the latest record. One-take video recorded in real time the minutes before the sold-out concert in Falconer, Copenhagen in April.

Email ThisBlogThis!Share to TwitterShare to FacebookShare to Pinterest
Etiketter: D-A-D, D.A.D, Danish, Denmark, DIC.NII.LAN.DAFT.ERD.ARK, Disneyland After Dark, Record of the Week, Rock, We All Fall Down

Btw, gillar "Record of the week"-konceptet!