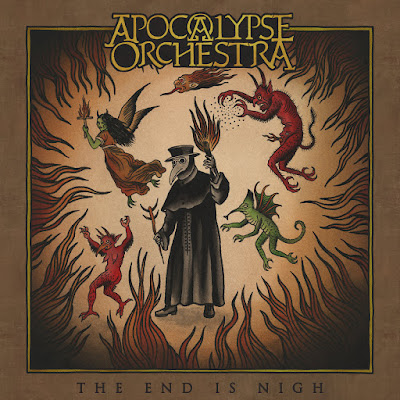 Lodged between medieval times and modern metal, APOCALYPSE ORCHESTRA weaves a faceted tapestry of music. The tones of ancient drone instruments entwines with heavy guitars and music separated by over 800 years meet.

The band was formed by musical partners in crime Mikael Lindstrom and Erik Larsson, inspired by their love for folk music and slow metal they decided to combine the two. With a foundation of original music and lyrics but also incorporating melodies from as far back as the 11th century the goal was to create a musical homage to a bygone musical era. The songs tell of flagellants, plague doctors, tales of hell, the meaninglessness of war and of suffering; they are all chapters in the bands grimoire. To balance it out they also shine a light on medieval art, science and enlightenment.

After an initial period of writing music, the band needed to prepare for the stage. Jonas, Rikard and Andreas, all long time friends of Mikael and Erik, was asked to join, each bringing their own styles and inspirations, thus completing the band. 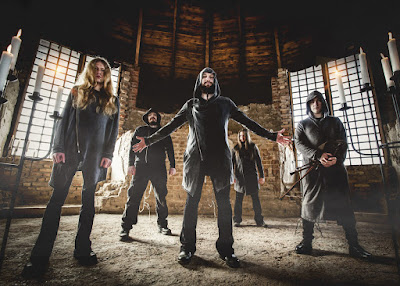 The quintet’s debut album, "The End Is Nigh", which focuses on tales of the plague, hell, and the meaninglessness of war and suffering, was recorded throughout the latter half of 2016. The drums were recorded at Studio Overlook by William Blackmon (GADGET, BEARDFISH, ISOLE) and the rest at Studio Bordun by the band. Per Nilsson of (SCAR SYMMETRY, ZIERLER, KAIPA) mixed the record at Studio Kabyss.

Since their inception in 2013, APOCALYPSE ORCHESTRA have become a familiar entity on the Swedish club circuit as well as making the festival rounds. With a live show that features theatrical performances (sometimes utilizing actors and dancers), fire and projected animation, the band has become one of the most talked about acts currently playing out. The band feels the theatrical element can enhance the music, giving it the feel of classic storytelling.

A performance was given live with the Gävle Symphonic Orchestra and a chamber choir, smelting the philharmonic with metal and folk music during a night of cross over music in a sold out concert hall.

APOCALYPSE ORCHESTRA always looks forward as well as inward, to seek answers to some of history’s biggest questions, as well as have a critical look at some common medieval myths. Lyrical themes ranges from everyday toils of the common man in the dark ages, onwards to art, science and literature, all the way to otherworldly views of existence. 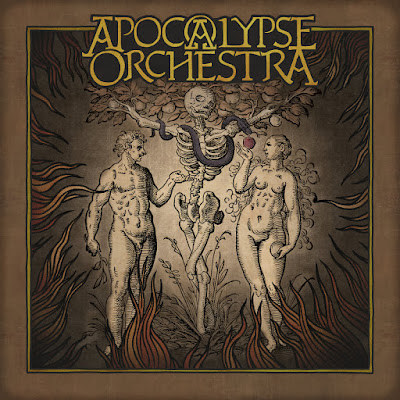 Today's tune "The Garden of Earthly Delights", taken from the bands latest album "The End Is Nigh", enjoy! Video directed, filmed and edited by Magnus Ewald. Christer Circle Linde, the actor performing in the video. Nymla, the artist who have created several of the masks seen in the video. www.nymla.se/. Stephansdotter Photography (writer) for all the wonderful photos taken on set. www.stephansdotter.com

Listen to ”Apocalypse Orchestra - The Garden Of Earthly Delights" on Spotify!

Email ThisBlogThis!Share to TwitterShare to FacebookShare to Pinterest
Etiketter: Apocalypse Orchestra, Folk, Medieval, Metal, Progressive, Swedish, The End Is Nigh