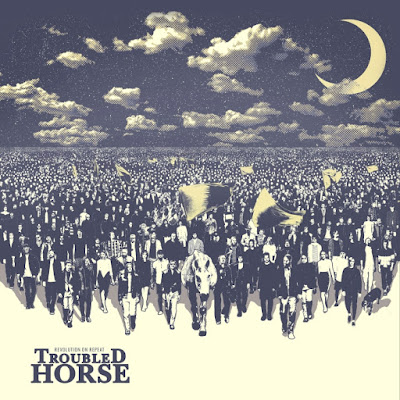 Monday, even if it’s Sunday here in Sweden it’s still a new week, so let’s introduce ”Record Of The Week"

"Revolution on Repeat” is the latest release from the Swedish garage rockers TROUBLED HORSE. The album was released Mars 31.

Formed in 2003 in their hometown of Örebro (also home to WITCHCRAFT), the Horse crew erupted into the consciousness of riff-worshippers everywhere with a low-key seven-inch vinyl release in 2010, and then their debut album "Step Inside", which was released by Rise Above Records in 2012. An invigorating whirlwind of spiky garage rock, propulsive psychedelia and thunderous, overdriven soul-meets-doom riffing, Step Inside showcased a band with little interest in current or nostalgic trends, instead revelling in a consciously classic but undeniably fresh new take on the most revered and ageless of musical components. 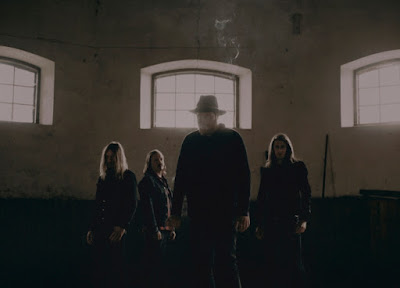 "Revolution on Repeat” is taken the next step forward since their debut album "Step Inside”. The album is righteous mix of the old school rock where the base is garage rock. It’s hard and bluesy rock that is spiced up with psychedelia and some pun. Even if the band bread the same air as WITCHCRAFT, GRAVEYARD and other classic 70’s retro band they stand out from the crowd, as I could say that they sound more as THE HELLACOPTERS with a 70’s approach. First thing that hits me after a few spins that these guys really enjoy what they are doing and they puts in everything that they got in this project. It’s a very fun, soulful album. With a a clean and crisp production you will get some nice listening hours.

The musicians are doing amazing work on "Revolution on Repeat”, album fires off with a real smoker ”Hurricane”, a galloping garage rocker then saddle to an old funky country riffages in "The Filthy Ones” with a vocal performance that will give you goose bumps, he screams, shouts and signs likes his intestines leaves the body. ”Which Way to the Mob” is a melodic rocker where Martin Heppich almost sounds like Nicke Andersson. ”Peasants” is a pulsations bluesy tune with a punk attitude to "The Haunted” where the doomish sound appears, in the middle of the tune they let loose of some marching drums and heavy riffing. ”Desperation” is a half pace swampy country/garage rocker with 60’s approach. "Track 7” stands out a bit, heavy riffing, punkish, bluesy and doomish to the great swampy desert country version of WARREN ZEVONs "My Shit’s Fucked Up”. ”Let Bastards Know” is a classic Swedish garage rocker. The album closes with the half pace start in ”Bleeding” to sparkle out to something furious until it falls back a bit to take some air until it fires off again, the tune fades out in the end right in the middle of the beauty part, wtf!

Sum: "Revolution on Repeat” is a really fun record that you should own!