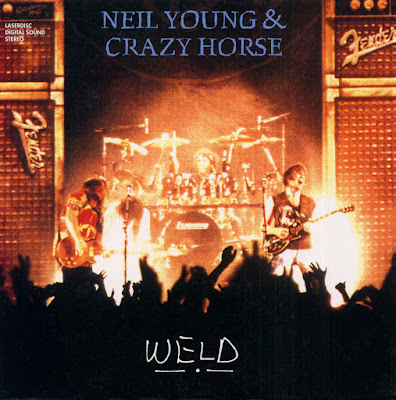 Weld is a live album and concert video by Neil Young & Crazy Horse released in 1991, comprising performances recorded on the tour to promote the "Ragged Glory" album. It was initially released as a limited edition three-disc set entitled Arc-Weld, with the Arc portion being a single disc consisting in its entirety of a sound collage of guitar noise and feedback. Arc has since been released as a separate title.

Weld consists of rock and roll songs by Young and Crazy Horse, duplicating seven that had appeared on either Rust Never Sleeps or Live Rust from twelve years earlier. It also echoes those albums as Young, in both cases having spent most of a previous decade pursuing different musical avenues, returned to straightforward rock and roll via the acclaimed Ragged Glory album with Crazy Horse, then celebrating that return with an accompanying multi-disc live document and concert film. An interesting cut on this album is Young's "Gulf War" version of Bob Dylan's "Blowin' in the Wind", which had air raid sound effects, check out today's tune.

Weld was recorded by David Hewitt on Remote Recording Services' Silver Truck. Neil Young claims that, while mixing this album, he permanently damaged his hearing.

There was a brief release of the concert featuring video footage on VHS, but there was no DVD release. The VHS tape is now an out-of-print collector's item. The mix on the video is by longtime Young collaborator David Briggs and is considered by some fans to be a harder-edged, superior mix, according to the book "Shakey." 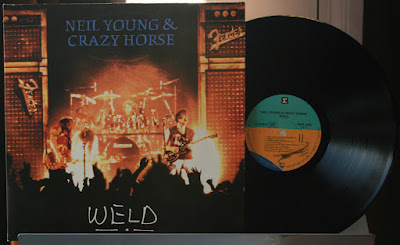 The album contains warhorses as "Like a Hurricane" and "Cortez the Killer" along with a'lot of wonderful 14 other tracks, the album's songs averaged over seven and a half minutes in length, and that length was given over to extended guitar improvisations, which often were filled with feedback and distortion.

If you compare this Live recording to the previous double live album "Live Rust" there are some similarities to this one, first it's a career retrospective that includes some acoustic numbers, but "Weld" is more of a rockier album, it's harder, more distortion, an excellent expression of Young.

On this album you will get tunes like "Hey Hey, My My (Into the Black)", "Blowin' in the Wind"and almost a 10 minutes version of "Love to Burn", "Cinnamon Girl", "Powderfinger", "Rockin' in the Free World" and "Tonight's the Night"

Sorry no Spotify in this one, will update the link if it's ever get released here!