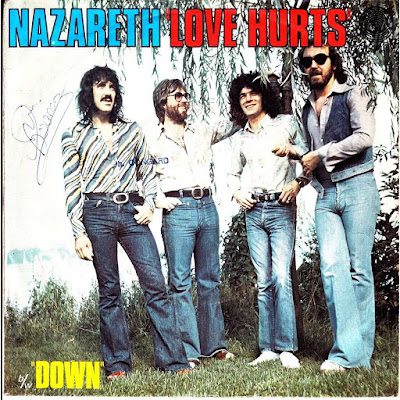 Today's tune "Love Hurts" is a song written and composed by the American songwriting duo Felice and Boudleaux Bryant. First recorded by THE EVERLY BROTHERS in July 1960, the song is also well known from a 1975 international hit version by the Scottish hard rock band Nazareth and in the UK by a top five hit in 1975 by the English singer Jim Capaldi.

The song was introduced in December 1960 as an album track on A Date with THE EVERLY BROTHERS, but was never released as a single (A-side or B-side) by the Everlys. The first hit version of the song was by Roy Orbison, who earned Australian radio play, hitting the Top Five of that country's singles charts in 1961. A recording by Emmylou Harris and Gram Parsons was included on Parsons' posthumously released Grievous Angel album. After Parsons' 1973 death, Harris made the song a staple of her repertoire, and has included it in her concert set lists from the 1970s to the present. Harris has since re-recorded the song twice.

The most successful recording of the song was by hard rock band NAZARETH, who took the song to the U.S. Top 10 in 1975 and hit number one in Norway and the Netherlands. In the UK the most successful version of the song was by former TRAFFIC member Jim Capaldi, who took it to number four in the charts in November 1975 during an 11-week run. The song was also covered by Cher in 1975 for her album Stars. Cher re-recorded the song in 1991 for her album of the same name. Rod Stewart recorded the song in 2006 for his album Still the Same... Great Rock Classics of Our Time which was No. 1 on the Billboard 200 chart.

Performed as a power ballad, the NAZARETH version was the most popular version of the song and the only rendition of "Love Hurts" to become a hit single in the United States, reaching No. 8 on the Billboard Hot 100 in early 1976. 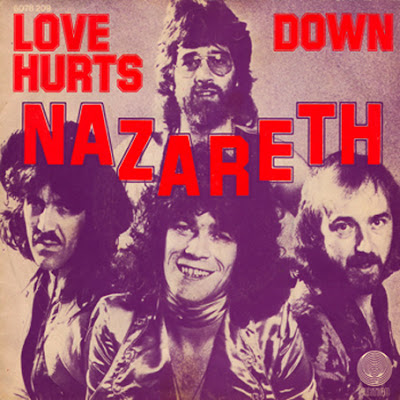 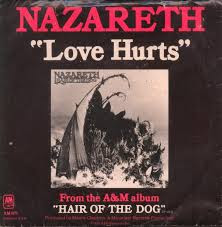 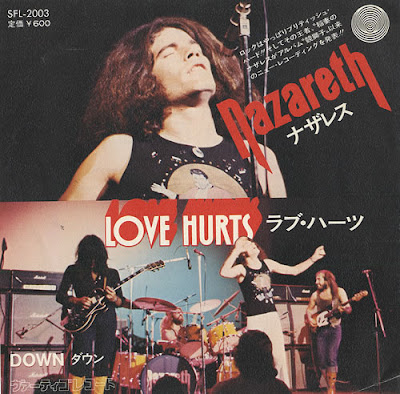 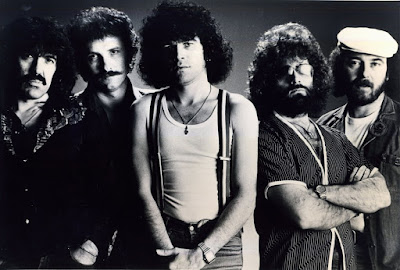 The lyrics of the song remained unchanged on all versions up until NAZARETHs 1975 recording, where the original line "love is like a stove/it burns you when it's hot" was changed to "love is like a flame/it burns you when it's hot". The NAZARETH track has been featured in the movies "Dazed and Confused", "Detroit Rock City", "Together", "Click", and "Halloween" among others. It was edited for use in a late-'90s Gatorade TV commercial. Other companies to have used the song in advertising include Southwest Airlines, Molson, Nissan (for the Altima), Zurich (worldwide 'True Love' advertising), and Toyota in Australia.

Cher used this NAZARETH version for her 1991 re-recording of the song for her album of the same name. In other media

The song was sung similar to the NAZARETH version in the "That 70's Musical" episode of That 70's Show.

Todays' tune is taken from the sixth studio album "Hair of the Dog" by the Scottish hard rock band NAZARETH, released in 1975. The album was recorded at Escape Studios, Kent, with additional recording and mixing at AIR Studios, London, and is the band's biggest selling album, having sold two million copies worldwide.

After three albums with DEEP PURPLEs Roger Glover producing, Manny Charlton stepped into that position, one he filled for several subsequent albums.

It was NAZARETHs first big hit album (aside from the minor success of Razamanaz), including classics such as the title track, "Love Hurts" (on the US version, but not the Canadian/European, it replaced the original "Guilty"), "Beggars Day" and "Please Don't Judas Me".

The album title is often considered to be a shortened form of the phrase describing a folk hangover cure, "the hair of the dog that bit you". However, according to Dan McCafferty, the title is a play on "heir of the dog", i.e. a "son of a bitch". This was the title the band had intended for the album, but the label did not approve and had the name changed.

The album was first reissued on CD in 1990. There are also remastered editions released since 1997 with different sets of bonus tracks.