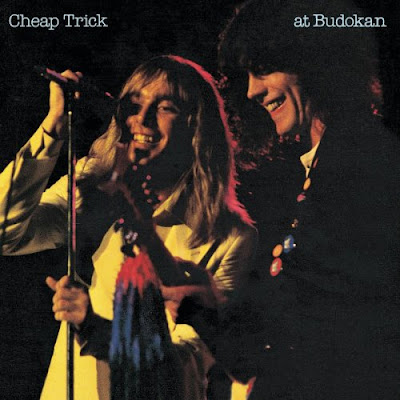 Sunday, time for a classic! "Live" is this weeks thingie so why not end this week with a real classic Live recording.

CHEAP TRICK "at Budokan" is a live album released by CHEAP TRICK in 1978 and their best-selling recording.

CHEAP TRICK found early success in Japan, and capitalized on this popularity by recording CHEAP TRICK "at Budokan" in Tokyo on April 28 and 30, 1978, with an audience of 12,000 screaming Japanese fans nearly drowning out the band at times. The album was intended for release only in Japan but with strong airplay of the promotional album From Tokyo to You, an estimated 30,000 import copies were sold in the United States and the album was released domestically in February 1979. The album also introduced two previously unreleased original songs, "Lookout" and "Need Your Love". 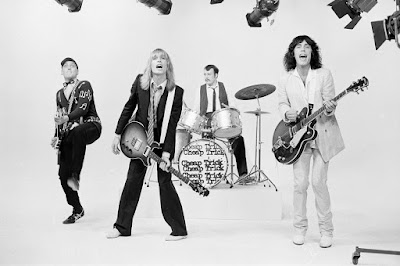 An unusual aspect of the album release in the UK was the use of coloured vinyl, then primarily restricted to singles and EP's, and soon replaced as a marketing gimmick by so-called "picture discs". A prominently displayed sticker on the sleeve of "Live at Budokan" announced that it had been released on "kamikaze yellow vinyl", and, unlike most coloured discs, which were usually as opaque as the conventional black vinyl records, the disc in the album is translucent. 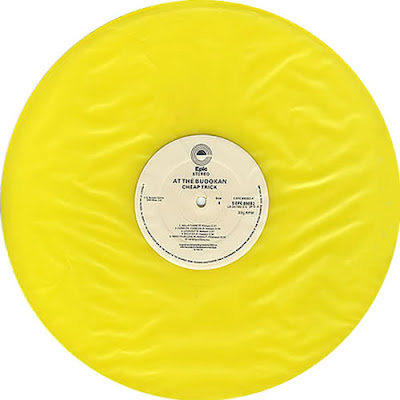 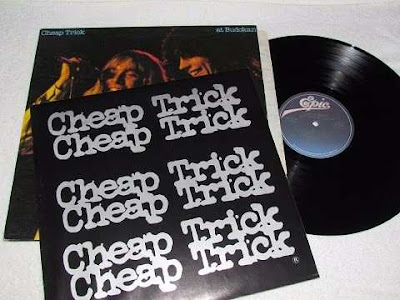 When CHEAP TRICK "at Budokan" was first released on compact disc in the U.S., first pressing contained a slightly different, possibly unpolished mix of the concert. Notably the guitar trade offs of "Ain't That A Shame" were obviously different from the vinyl release.

"at Budokan" served not only to document the raw power and songcraft that was CHEAP TRICK live, but also to display that songs from a "live album" can sound as good as from their original studio form and sometimes even better, "at Budokan" is one of those that in my mind sounds better live than studio. Many of these tunes, like "I Want You to Want Me" and "Big Eyes," were pleasant in their original form, but seemed more like sketches compared to the roaring versions on this album.

During the time of "at Budokan's" recording, the band already released "Cheap Trick" and "In Color", as most of their setlists back then had tunes from those respective albums, but a few songs from their upcoming smash "Heaven Tonight" also appeared.

And now nearly 30 years later, we are left with this great piece of live music and rock history.

Sum: If there is one CHEAP TRICK album that you need then it's this! 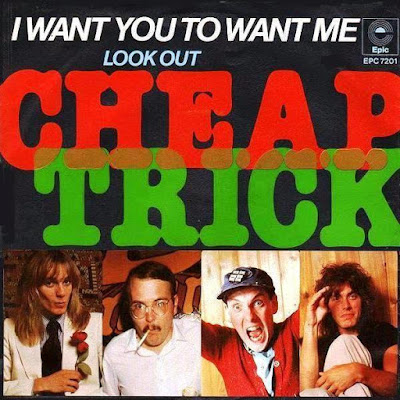 Today's tune "I Want You to Want Me" is a tune from their second album "In Color", released in September 1977. It was the first single released from that album, but it did not chart in the United States.

"I Want You to Want Me" was a number-one single in Japan. Its success in Japan, as well as the success of its preceding single "Clock Strikes Ten" paved the way for CHEAP TRICKs concerts at Nippon Budokan in Tokyo in April 1978 that were recorded for the group's most popular album, CHEAP TRICK at Budokan. A live version of "I Want You to Want Me" from the album CHEAP TRICK at Budokan was released in 1979 and became their biggest selling single, reaching #7 on the Billboard Hot 100. It was certified Gold by the Recording Industry Association of America, representing sales of one million records. In Canada, it reached #2 in on the RPM national singles chart, remaining there for two weeks and was certified Gold for the sale of 5,000 singles in September 1979. It was also the band's highest charting single in Britain, where it reached #29.

"My recollection is that [songwriter Rick Nielsen] did that song as a bit of a joke, because at the time when we had done that song there was a lot of pop music on the radio—ABBA, and all sorts of things, disco, [Rick thought] 'I'm just going to do an over-the-top pop song. I just want to do one that's so silly—total pop—and then we'll do a heavy version of it.' He didn't know what was going to happen with it. The idea was to have it like a heavy metal pop song. CHEAP TRICK doing ABBA—except a very heavy version."

Rick Nielsen explains his perspective behind the song:

"I just pictured myself in a big, overstuffed chair, and my dad turned on the TV; there were like three stations. I wanted to watch Gabby Hayes – he was a cowboy. I always wanted what wasn’t there, so I think that’s what made me inquisitive throughout my whole life. When you wanted Gabby, Gabby’s not there; when you want your dad, your dad is not there. It was the easiest lyric I could think of. And I wish I were that stupid more often. It’s like Van Morrison – with some of his old songs it didn’t matter what the lyrics meant, it’s how they sounded."

Years later, Nielsen and Petersson criticized the lightweight production of "I Want You to Want Me" as it originally appeared on their second album, "In Color". CHEAP TRICK went as far as to mostly re-record that album in 1998. Producer Tom Werman explains:

"'I Want You To Want Me' was a fabulous dancehall type of song, and a perfect pop tune, and it was meant to be a little campy. I put the piano on—a guy named Jai Winding played it. I remember asking the band what they thought of it, and Rick Nielsen kind of shrugged and said, 'You’re the producer.'" Further: "It was a burlesque song, like a 30’s number. That is what they wrote it as."

Listen to ”Cheap Trick - I Want You to Want Me" on Spotify!

Email ThisBlogThis!Share to TwitterShare to FacebookShare to Pinterest
Etiketter: 1978, American, At Budokan, Cheap trick, I Want You to Want Me, Live, Live Recording, Rock, Sunday Classic