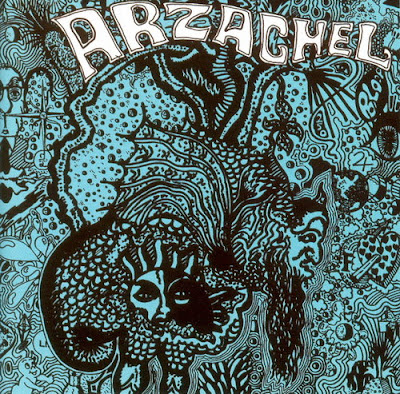 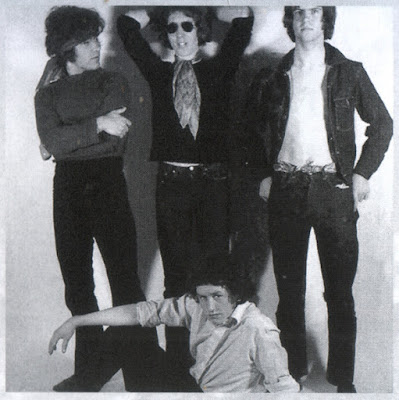 Formed while Hillage, Campbell and Stewart were at the City of London School, they initially played covers of CREAM, JIMI HENDRIX, JOHN MAYALL & THE BLUESBREAKERS and THE NICE. After Hillage left in mid-1968 to attend university, the remaining trio began playing original material written by Campbell and Stewart. Bowing to pressure from their managers, they changed their name to EGG in early 1969. Shortly after EGG signed to Decca, a tiny company named Zackariya Enterprises gave the musicians an opportunity to record a psychedelic session for the burgeoning market. Since this was not "Egg material" (and besides, they were under contract now to Decca), URIEL re-united to produce their sole album in June 1969, a one-off psychedelic project under an assumed name ARZACHEL (named after a crater on the moon, itself named after a medieval Spanish astronomer). The musicians also used pseudonyms on the album, although their biographies each contain some measure of truth:

Simon Sasparella (Steve Hillage) - lead guitar and vocals. Sim was born in Seatoller, Cumberland in 1948, and has been playing guitar for 11 years. His dark Northern ruggedness is offset by the coolness of his manner. These two qualities are reflected in his playing – heavy, emotional work, and soft, subtle sounds. He believes that music is the only really physical art form – and is in a lifelong search for the ultimate musical power, on the same scale as the rocky Lake District crags from whence he came.

Njerogi Gategaka (Mont Campbell) – bass guitar and vocals. Njerogi was born in Mzumi Springs, a small border town in the north of the Kenyan Rift Valley. He trained to be a Manjanga drummer for the local Kyuma dances, but came to England with family in 1962. He lived in Brighton for five years, then moved to London, where he formed ARZACHEL with Sim, Basil and Sam. He believes that music stems largely from the sexual urge, both of which have an integral part in rhythm, having been taught this as part of his drum training.

Basil Dowling (Clive Brooks) – drums. Basil was born in Tottenham in 1947; as one would expect, he was an ardent Tottenham Hampton F.C. supporter in his younger days, but decided it would no longer be wise to go to football matches when his wiry bushy hair reached shoulder-length. He has been in seven groups, playing every conceivable style of music from dance band to skiffle. Basil is a heavy, violent drummer; he has been known to break fourteen sticks in as many bars. He believes that if it were not for ARZACHELs music, his violence would still be expressed in seat-slashing and toilet-roll throwing.

Sam Lee-Uff (Dave Stewart) – organ. Sam was born in Lewisham in 1949 – he could play the piano when only two years old, and began to take organ lessons at the age of seven. He was expelled from public school, and spent eight months living on crusts, playing a battered accordion on street corners. This he refers to as his "hang-up" period. When the Psychedelic scene began to blossom, Sam joined various unsuccessful groups. ARZACHEL was a result of meeting up with Sim and Njerogi. Sam's favourite artistes include Heinz; Mike Ratledge; Holst; P.J. Proby; Vincent Crane. He believes music to be an expression of one's inner being – this expression, he says, will lead to the ultimate spiritual liberation of one's personality.

Today's tune "" is taken from the self titled album ARZACHEL, it was recorded and mixed in a single session in London. The 'A' side has four songs, while the 'B' side consists of only two mind-bending psychedelic tracks, the longer of which is a 17-minute jam entitled 'Metempsychosis'. It was issued on the short-lived Evolution label (also home to the debut by Raw Material) and quickly became a collectors' item. A pirate version is thought to have circulated in the late 1970s, and it has been much bootlegged in more recent years. It was eventually released on CD by Demon Records in 1994.