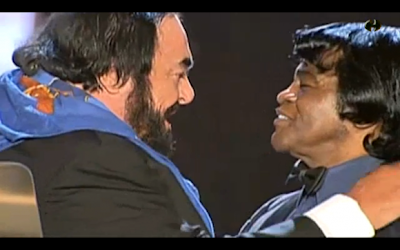 Im sitting home without Stones today as he is on a Hardrock evening with his geek friends ;p
Sorry, its a great bunch of guys.
One of them is a Robert that also have a metal blog thats in Swedish im afraid, but its awesome!
Its called Metal!, check it out its great!
They all have their own made disc full with hardrock/metal music and they listen to em and drink beer and eat pizza...I think.
How will i know Im not there :p AH WELL... back to Tune Of The Day

Its Sunday and Classic time :D

Just come to think of this tune.
I love James Browns groove and feeling
and the quite opposite singer, Pavarotti.
The feeling of it all make me get goosebumps. 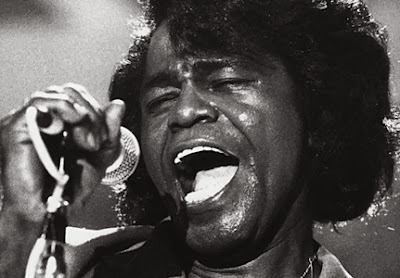 James Brown One of the founding fathers of funk music and a major figure of 20th-century popular music and dance, he is often referred to as "The Godfather of Soul". He was a active artist from 1954-to his death 2006. I respect this man a lot in the world of music! 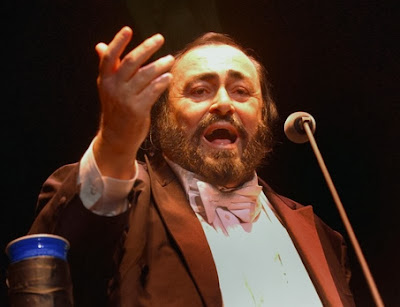 Luciano Pavarotti was born some years later than James, 1935.
In 1955, he experienced his first singing success when he was a member of the Corale Rossini, a male voice choir from Modena that also included his father, which won first prize at the International Eisteddfod in Llangollen, Wales. He later said that this was the most important experience of his life, and that it inspired him to become a professional singer. He also died in 2006. Respect to him as well!

Ladys and Gents this is James Brown and Lucian Pavarotti.