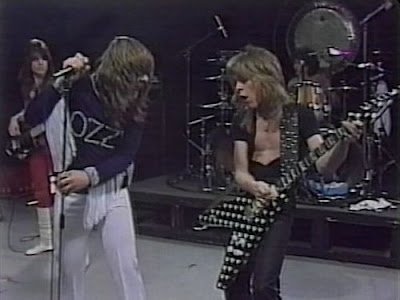 "Mr. Crowley" is a 1980 heavy metal song performed by Ozzy Osbourne, released on the album Blizzard of Ozz, Osbourne's first solo effort following his firing from Black Sabbath. Musicians playing on the song are guitarist Randy Rhoads, bass guitarist Bob Daisley, and drummer Lee Kerslake. Don Airey plays the song's distinctive funeral organ introduction.
The second guitar solo in "Mr. Crowley" is ranked number 28 on Guitar World Magazine's poll of the "100 greatest guitar solos" and number 34 on Planet Rock's list of the 50 greatest guitar solos.[1]
The song was inspired by books about Aleister Crowley which Ozzy Osbourne had read and a deck of tarot cards that were found in the studio. Contrary to popular opinion, Ozzy pronounces Mr. Crowley correctly ('kroʊli').
Noted covers include Judas Priest, Moonspell (Darkness and Hope, 2001) and Cradle of Filth (Nymphetamine Special Edition, 2005). Tim 'Ripper' Owens, (with Yngwie Malmsteen on guitar), Joe Lynn Turner, George Lynch and The Cardigans have also recorded covers of the song.