Jorn Lande - Out To Every Nation 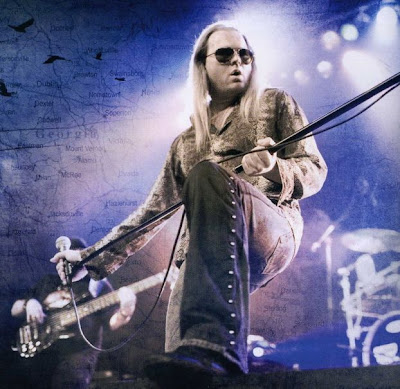 Jørn Lande is a Norwegian heavy metal and hard rock singer. Born May 31, 1968. Jørn Lande has performed with bands such as Vagabond (with Ronni Le Tekrø from TNT), Yngwie Malmsteen, ARK, Beyond Twilight, Mundanus Imperium, Nikolo Kotzev's Nostradamus, Millennium, Symphony X, Ken Hensley and The Snakes as well as his own self-titled solo effort. Also the global metal scene fronting Masterplan, with whom he released two albums. Jørn have been thru many votings all over the world appointed to be the best hardrock singer and has been was compared to other vocalists as David Coverdale (Whitesnake) and Ronnie James Dio (Dio, Black Sabbath). 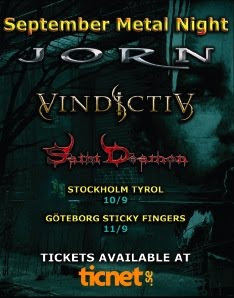 Yesterday Jørn entred the stage @ Tyrol/Stockholm for a gig with 2 other bands (SAINT DEAMON and VINDICTIV). What about yesterday, well the first opening act "Saint Deamon" was a suprice, well done power metal, with Jan Thore Grefstad on vocals a guy who really can sing, the music was well played, i kinda like it and they did a good performance aswell. The 2:nd act "Vindctiv" with the great guitar player and bandleader Stefan Lindholm togheter with Nalle Phålsson did a great show aswell.
And for the last Jørn and his band, yes he rocks well live aswell, he really has a magic voice and stands among the greatest hardrock singers. The show was great indeed, it included everything that you could imagine a rock show should include.
2 sets of guitar solos with Tore and Tor Erik and ended up with a great drum solo with the great drummer Wild Willy.
Tunes like Stormcrow, Spirit Black, Man of the Dark, Rock and Roll Angel, Stormbringer and War of the world was played, but i didnt hear one of the tunes that i really like with Jørn "Out To Every Nation" witch is a really nice tune with him.
So i skip the set list and take it in anyway :)

Todays tune video from his third solo album out to every nation.
Enjoy!