Yesterday at Hovet in Stockholm... Continued...
A great day with a lot of cool rockers,
and a bunch of great technicians that
worked with us building the act.

With 4 marvelous bands, Headline was DreamTheater,
then there were Opeth (that could be headline by themselfs)
Bigelf and Unexpect the last 2 we will be back!

Opeth are a 5 man band, most of them have other projects as well.

The rhythm and lead gitarrist Fredrik Åkesson a really great guy,
is also active in Krux, Monsters of Metal and Talisman.

Martin Mendez is the bass guitar player and the second most
consistent member of the band.


Martin "Axe" Axenrot is the drummer for the bands Bloodbath,
Satanic Slaughter, Witchery, and most recently, Opeth.
Axenrot played with Opeth on their last five tours,
filling in for then drummer Martin Lopez.
On May 12, 2006, he officially joined the
band as Lopez left permanently 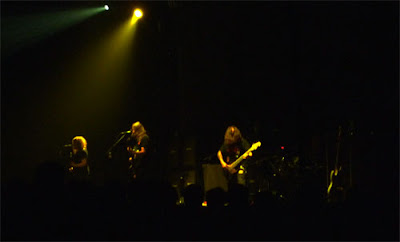 It was a pleasure to see them preform at Hovet,
I really liked them, Åkerfeldt growl is marvelous!
Vocally, Åkerfeldt shifts between growling
death metal vocals for heavy sections, and clean,
sometimes whispered vocals over acoustic passages.
Marvelous!!