Nina Simone - Ain't Got No, I Got Life Sunday, time for a classic, today we put some focus on Nina Simone, she was an American singer, songwriter, pianist, arranger, and civil rights activist widely associated with jazz music. Simone aspired to become a classical pianist while working in a broad range of styles including classical, jazz, blues, folk, R&B, gospel, and pop.

Born the sixth child of a preacher's family in North Carolina, Simone aspired to be a concert pianist. Her musical path changed direction after she was denied a scholarship to the prestigious Curtis Institute of Music in Philadelphia, despite a well-received audition. Simone was later told by someone working at Curtis that she was rejected because she was black. When she began playing in a small club in Philadelphia to fund her continuing musical education and become a classical pianist she was required to sing as well. She was approached for a recording by Bethlehem Records, and her rendering of "I Loves You, Porgy" was a hit in the United States in 1958. Over the length of her career Simone recorded more than 40 albums, mostly between 1958—when she made her debut with Little Girl Blue—and 1974.

Her musical style arose from a fusion of gospel and pop songs with classical music, in particular with influences from her first inspiration, Johann Sebastian Bach, and accompanied with her expressive jazz-like singing in her characteristic contralto. She injected as much of her classical background into her music as possible to give it more depth and quality, as she felt that pop music was inferior to classical. Her intuitive grasp on the audience–performer relationship was gained from a unique background of playing piano accompaniment for church revivals and sermons regularly from the early age of six years old.

In the early 1960s, she became involved in the civil rights movement and the direction of her life shifted once again. Simone's music was highly influential in the fight for equal rights in the United States. In later years, she lived abroad, finally settling in France in 1992. She received a Grammy Hall of Fame Award in 2000 and was a fifteen-time Grammy Award nominee over the course of her career. 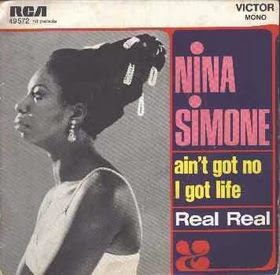 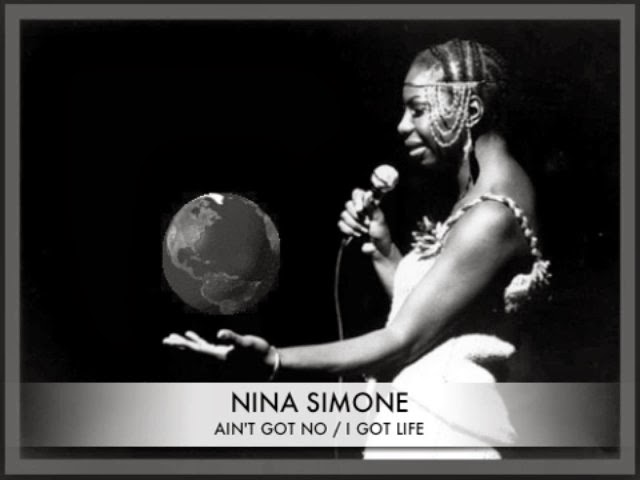 Todays tune "Ain't Got No/I Got Life" is a 2:17 single by the American songwriter Nina Simone. The song also featured on Nuff Said (1968). It is a medley of two songs from the musical Hair, with lyrics by James Rado and Gerome Ragni and music by Galt MacDermot. The song charted at #2 in the UK and at #1 in The Netherlands. The song helped Simone gain pop-popularity under a new, younger audience, and became a standard in her repertoire.

Listen to ”Nina Simone - Ain't Got No, I Got Life" on Spotify here!