Sunday, time for a classic. "Lucky Man" is a song by the English progressive rock supergroup Emerson, Lake & Palmer, from the group's 1970 self-titled debut album. Written by Greg Lake when he was 12 years old and recorded by the trio using improvised arrangements, the song contains one of rock music's earliest instances of a Moog synthesizer solo. "Lucky Man" was released as a single in 1970 and reached the top 20 in the Netherlands. The song also charted in the United States and Canada. The single was re-released in 1973 and charted again in the U.S. and Canada.

The album was intended not as an effort by a unified band, but as a general collaborative recording session, and as such, some of the tracks are essentially solo pieces. The cover art painting is by the British artist Nic Dartnell. Although it has been said to be originally intended for the American group Spirit, and that the bald-headed man on the left of the cover is Spirit's drummer, Ed Cassidy, the artist denied this in an interview with Mike Goldstein of RockPoP: "I'd like to take a moment and dispel a rumor that, according to Wikipedia, the image is somehow linked to the LA band Spirit. The fact is that, at the time I painted the ELP "Bird", I also painted a portrait of Spirit which I sent to them in LA. A very similar bird was featured in the corner of that painting. I got a message from Spirit to say that if they had received their painting in time they would have put it on the back of 12 Dreams of Dr. Sardonicus. I became friendly with Randy California over the years and I took the photograph that is on his 1982 12" EP All Along the Watchtower. The bald image in "Bird" has no connection to Ed Cassidy of Spirit and doesn’t look anything like him. Ed still has the Spirit portrait – so I’m told. The cover depicts a fluttering white bird with a human ear in the bottom left corner; the bird's left wing outlines the back of the male head to which the ear is attached, the other half of which is on the back of the album, and the right wing outlines a female head."

When asked in an interview if he felt "lucky" to have written the song, Lake responded:

I did write “Lucky Man” when I was 12. My mum bought me a guitar and I was very lucky in that sense, the answer was yes instead of no. There was the first bit of luck because had the answer been no, my life would have probably been totally different. I got the guitar and I learned the first four chords that were D, G, A Minor and E Minor and with those chords I wrote “Lucky Man”. I truly cannot remember everything about writing it other than I think it struck me as being a sort of minstrel type of event with these chords, G, D, E Minor and A Minor, gave me this sort of minstrel feeling. “Lucky Man” has kind of an almost medieval element tone to it. It is like a medieval folk song in a way. That was the essence of the idea. I wrote the song in its entirety and I finished it and I remembered it. As far as its significance regarding me and how lucky I was, I suppose it does really. You cannot disassociate the tune, the song has been very lucky for me. It came about because of a piece of good fortune, which was my mother giving me the guitar and it has been lucky for me ever since. I would say if I was going to be honest, I have been very lucky in life. I certainly have been. 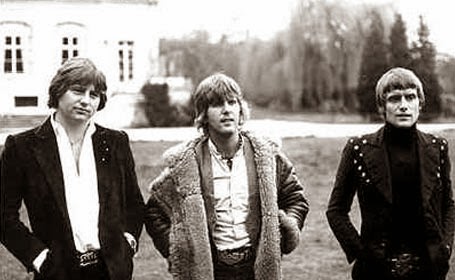