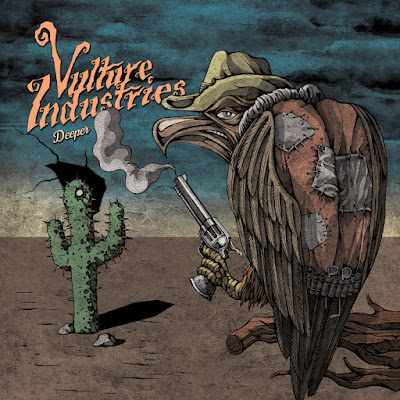 The Norweigan oddballs VULTURE INDUSTRIES is an excellent band to continue the little far-out choice we had yesterday.

A band that plays a surrealist brand of dark metal cabaret, heavy rock vistas bent and twisted into living entities embodying the width and breadth of human emotion.

The single "Deeper" 7″ features the new VULTURE INDUSTRIES single paired up with a live recording of "The Benevolent Pawn" from the venerable concert venue USF in Bergen. This exclusive single, released for the Strange Rain Tour, is strictly limited to 500 copies on green Danish vinyl, released via Dark Essence Records. The tune has a spaghetti western vibe of Ennio Morricone and with a touch of Nick Cave. "Deeper" tells the story of man's insatiable greed for more, as symbolized by the miners digging all the way to Hell.

The front man Bjørnar says this about the formation of the track:

“It was one of those scorching summer days of 2018. The grass in the fields had all turned the colour of old paper, and the sun, at its zenith, was mercilessly searing our skin. Thirsty, hungry, and with tongues swelling, we had just missed the ferry crossing and could taste our hopes turn to ashes in our mouths. Trying to remain calm, but steadily feeling the building pressure of desperation, as a boiler ready to blow, we waited in line. Then suddenly the one year old in the back seat broke the silence chanting AHUM, AHUM, AHUM, AHUM! Overcome by what felt like divine inspiration but might very well have been sent from the depths of Hell, I started drumming on the dashboard. DUM, DADADUM, DADADUM, DADADUMDADUMDADUM.” 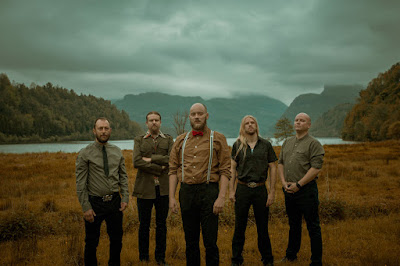