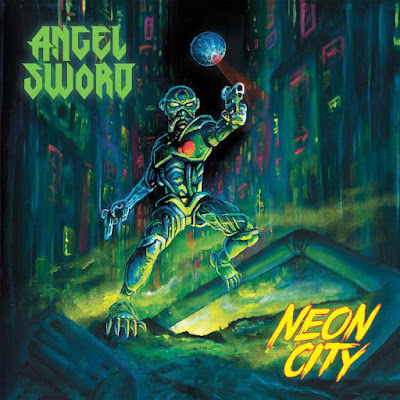 With yesterday's post, I got a taste of traditional heavy metal in the present time and simply decided that I will continue on the same track for the rest of the week and offer some new discoveries and maybe have something that interests you as a reader.

So first out is one of the finest in Heavy Metal / Hard Rock from Helsinki, FINLAND!

ANGEL SWORD worships the heavy metal gods of old, fallen into slumber decades ago and now angered by the polished plastic sound of modern metal. Prepare for a skull-crushing, vomit-inducing dose of real heavy metal!

Hard and heavy rockers of the finest caliber, is what to expect on their second full-length album titled "Neon City". Further honing their expert songcraft shown on their sold-out first album, "Rebels Beyond The Pale", the new album is packed to the brim with catchy as sin riffs and melodies, powerful and sincere vocals, and 8 songs telling woefully triumphant tales of surviving in this cold, "Neon City". The album was released on November 16, 2019, on green cassettes, limited to 100 copies, and 500 copies on CD. Hopefully, a Vinyl version will be released soon. 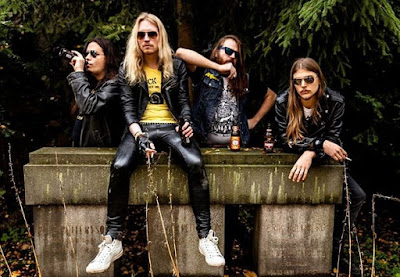 Hey, that's strange.
The playlist is open for all.
Angel Sword is released on Spotify.

Link to the album :
https://open.spotify.com/album/1UE4QQ6n7KtjLmWRsp6CpC?si=BhNpBvXcTjybev2Cinifnw

Link to the playlist: