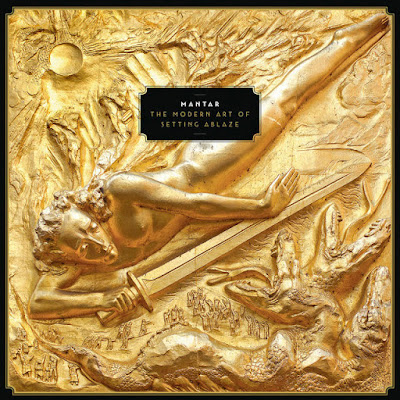 "The Modern Art Of Setting Ablaze" is the third studio album by the unrelenting, violent and primal rage from Germany's most ferocious duo MANTAR!

MANTAR is melting the most sinister elements of styles like Black Metal, Crust Doom and Sludge in their creations.

"The Modern Art Of Setting Ablaze" is a heavy piece of music, their boldest and bombastic release so far, a perfect album for autumn times when the darkness comes closer and closer eash day. The album opens up with the long intro "The Knowing" before it burst out more brutality with strong black metal influence in "Age Of The Absurd", where extremely guitar licks, howling screams by Hanno Klänhardt, drum beat like a thunderclouds patterns on the skins of the drummer boy Erinç Sakarya opens up the gateway to hell. "Seek + Forget" and "Taurus" follows the same route as already laid out, but with more catchy angryness in the melody and rhythm that punches you in an epic fist fight. "Midgard Serpent (Seasons of Failure)" is a groovy piece with slower, grinding pace, great melody and that continues on aggressive "Dynasty of Nails" and the more faster piece "Eternal Return" to the haunted organs intro in "Obey the Obscene" before the angry bird lands on stage. "Anti Eternia" is a more straight forward sludge piece, melodic riffing and rocking vocals in their best way. "The Formation of the Night" is a doomish melodic rocker, catchy with great riffing that continues with the groovy "Teeth of the Sea" and the album ends with the filthy melodic piece "The Funeral". As a listener, I feel that this is a solid release, really fun to listen to and it's absolutely their best album yet.

Sum: "The Modern Art of Setting Ablaze" is a filthy and heavy piece of music that works like a charm!