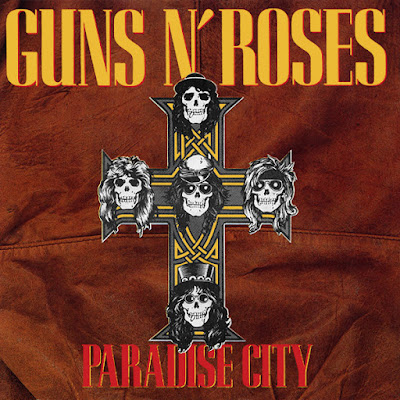 Only a few days ago a real classic band entered Swedish soil for a concert at Friends Arena, a show that was way over my expectations. Axl Rose was in a very condition, good fit, loosed some wait, great song performance so my view point on this man got pretty wipe out since he has acted as a real dumbfuck latly. The expectation for the show was growing a bit since the stand in he did for AC/DC where he showed that he still is a performer and can act as a team member again, keep time and not fuck around. Well done Axl! The two other original members did a superb job, Slash is an excellent guitarist and Duff, wow what a bass player he is and what a persona he have. I could elect him as the star of the night. The others band members for the tour did an amazing job to keep the Guns name up! The opening acts during this evening was BACKYARD BABIES and THE DARKNESS,
So let's play a classic Guns song. 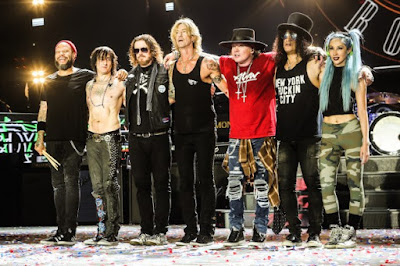 Today's tune "Paradise City" is a song by the American rock band GUNS N' ROSES, featured on their debut album, "Appetite for Destruction" (1987). It was released as a single in November 1988. It is also the only song on the album to feature a synthesizer. (It was Axl Rose's idea). It is most known for its iconic lyrics, "Take me down to the Paradise City, where the grass is green and the girls are pretty." It is also frequently played at sports stadiums during games along with "Welcome to the Jungle", also from Appetite for Destruction.

This was the first song that the original GUNS N' ROSES lineup of Slash, Steven Adler, Duff McKagan, Axl Rose and Izzy Stradlin wrote together - all five members are credited as writers. According to McKagan, they started working on it during one of their first rehearsals, and it started with some lyrics he brought from a notebook.

On 93.1 WIBC FM, a radio station in Indianapolis, Indiana, Jake Query, who is a friend of Axl Rose, explained that the part of the song where they sing, "Where the grass is green, and the girls are pretty" is about when Axl Rose and his family would go down to Bloomington, Indiana.

GUNS N' ROSES' lead guitarist, Slash, states that the song was written in the back of a rental van as they were on their way back from playing a gig in San Francisco with the band Rock N Riders. He says that the band was in the back of the van, drinking and playing acoustic guitars, when he came up with the intro. Duff McKagan and Izzy Stradlin started playing along. Slash started humming a melody when Axl Rose sang, "Take me down to the Paradise City." Slash chimed in with "Where the grass is green and the girls are pretty." Rose sang the first line again, where Slash shouted out "Where the girls are fat and they've got big titties." Rose finished with "Take ... me ... home!" Slash preferred his second line but the rest of the band felt differently. He was outvoted and they used the first line. The band then expanded upon the rest of the lyrics in rounds. Finally Slash wrapped up by coming up with the heavy riff that drives the song.

Much like "Welcome To The Jungle," this was inspired by Los Angeles, where the band was living. The verses deal with the rough life on the streets, but the chorus was based on Axl Rose's memories of the Midwest, with images of green grass, innocence and possibility. 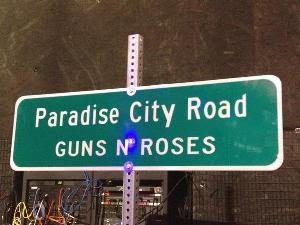 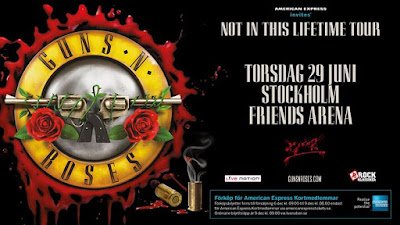 Guitarist Andy McCoy has said that the song is copied from several riffs written by his band, HANOI ROCKS. He has said that the chorus is just a slower version of the riff in "Lost in the City". Axl Rose has often cited HANOI ROCKS as GUNS N' ROSES' biggest influence. HANOI ROCKS' original rhythm guitarist Nasty Suicide can also be seen in the music video for "Paradise City." The style of the main riff of "Paradise City" (involving an ascending chromatic riff) has also been used by many former GUNS N' ROSES members in new projects. This can be seen in Izzy Stradlin's "Bomb" and VELVET REVOLVERs "Do It for the Kids". According to Tracii Guns of L.A. GUNS and former member of GUNS N' ROSES, the riff was influenced by the BLACK SABBATH song "Zero the Hero" from the Born Again album. 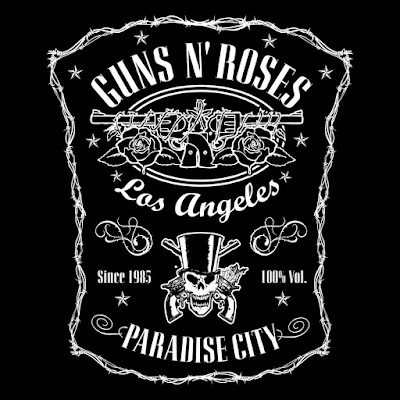