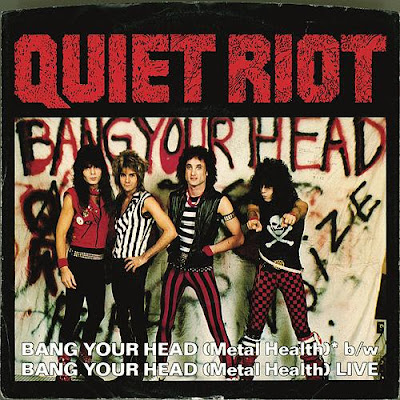 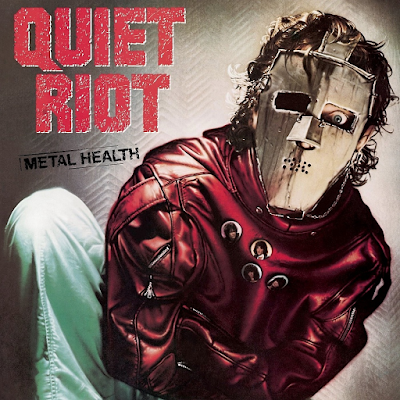 The song title is a play on "Mental Health," and is a celebration of the rebellious nature of Heavy Metal and fans who bang their heads to the music. The target audience was teenage boys; this is evidenced by the video, which shows one of the species undergoing a Metal assault in his bedroom, and by the references to teachers in the lyrics.

Helped by a video that got lots of airplay on MTV, this song helped bring Heavy Metal music with a Pop sheen into the mainstream, paving the way for photogenic Hair Bands of the '80s like MÖTLEY CRUE and TWISTED SISTER. The video was based on the album cover, which showed a guy in a straightjacket and Hannibal Lecter mask. In the clip, he makes a daring escape from the asylum. In 1998, QUIET RIOT lead singer sang on an acoustic version with The Neanderthal Spongecake that appeared on their album The Side Effects Of Napalm. Cevin Soling of The Neanderthal Spongecake explains how this came together:

"Eric Clapton had done his cover of "Layla", of his own song. I thought it was just atrocious, doing this mellow version and that acoustic thing. I thought it was an abomination, and so as sort of a joke I played this acoustic version of QUIET RIOTs "Metal Health" And so, I was working out in the studio while we were working on our album, and it just started coming out really, really well - an acoustic version of the ultimate headbanging song. But it came out brilliantly, and I started adding strings and a choir, and it got pretty insane. But the problem was the original concept of the vocals was supposed to be this hard core kind of slacker vocals over this acoustic sound. But the music was just too good to sort of do that to. So I managed to get in touch with Kevin Dubrow, the lead singer of QUIET RIOT, and asked him if he was interested in singing on it. His initial response was no, because I guess MARILYN MANSON was responsible for getting the band back together again, and then they were actually going to be cutting a new version of that song to sort of exploit it. But he agreed to listen to it anyway. And then after I sent it out to him, he called me immediately and said, 'I have to sing on this. Please let me sing on this.' Because it was such a radical departure, and so unexpected. So he was working as a DJ out in Vegas at the time, and so I flew out to Vegas and recorded with him, and Lindsey Buckingham's son actually was the engineer there. The whole experience was just a lot of fun, working with him. And he was great. I wasn't so much into the heavy metal music, but he was telling me how he had this terrible reputation, but I didn't know anything about his reputation or anything about him being difficult. Because he could not have been easier to work with, could not have been more professional. The whole thing was a pleasure. And I thought, hey, this could be kind of fun to do this kind of concept for a whole album. But not necessarily having people do their own materials, pairing people up with the least likely song that you could imagine them doing. (Cevin went on to executive produce the album When Pigs Fly: Songs You Never Thought You'd Hear. Check out his full interview.)

Depending on your definition of "Heavy Metal," Metal Health was the first album in the genré to hit #1 on the Pop charts. >> The song can be heard in the movie Footloose, playing in car of the character Ren. It was also used as the entrance theme for Randy The Ram in the 2008 movie The Wrestler.

The songwriter/producer Spencer Proffer produced the album, including this track. Proffer owned a recording studio and was key to giving QUIET RIOT their start, but much of his later work was far less Metal: he was the music consultant on the show Sabrina, The Teenage Witch, and produced the TV series Happily Ever After: Fairy Tales for Every Child. 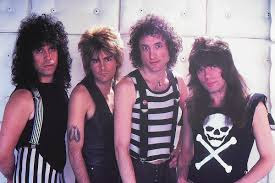 QUIET RIOT is an American heavy metal band. The band was founded in 1973, by guitarist Randy Rhoads and bassist Kelly Garni under the name Mach 1. They then changed the name to Little Women, before settling on QUIET RIOT in May 1975. The band's name was inspired by a conversation with Rick Parfitt of the British band STATUS QUO, who expressed desire to name a band "Quite Right," and his thick English accent made it sound like he was saying "QUIET RIOT" The band is ranked at No. 100 on VH1's 100 Greatest Artists of Hard Rock.

The original line-up featured Rhoads and Garni with lead vocalist Kevin DuBrow and drummer Drew Forsyth. Their most commercially successful lineup consisted of DuBrow alongside guitarist Carlos Cavazo, bassist Rudy Sarzo and drummer Frankie Banali, and in 1983 released their breakthrough album Metal Health, which is known for being the first heavy metal album to top the Billboard album chart. Despite several lineup changes and brief breakups, QUIET RIOT continued to record and tour until DuBrow's death from a cocaine overdose in 2007. Banali revived the band in 2010, and the current lineup consists of himself on drums, lead vocalist James Durbin, bassist Chuck Wright and guitarist Alex Grossi, with no founding members remaining.

The band have continued to record as well as tour following DuBrow's death, and in 2014, they released their first album in eight years titled QUIET RIOT 10, with their next album Road Rage set to follow in summer 2017.

Today's tune "Metal Health (Bang Your Head)" is taken from the the third studio album "Metal Health", It was released on March 11, 1983. Enjoy!