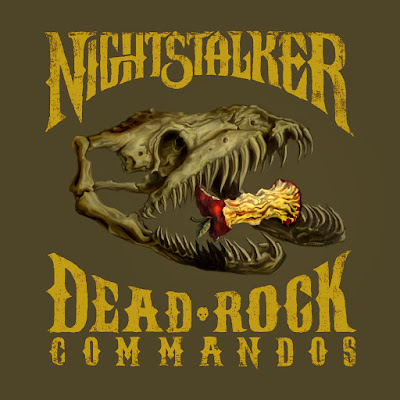 Monday, New week, time to introduce "Record Of The Week"

"Dead Rock Commandos" is an album by the Greece rockers NIGHTSTALKER, a band that comes from the land of Apollo and Hades. They have been around for almost two decades already. NIGHTSTALKER consist of Argy (Vocals), Andreas Lagios (Bass), Tolis Motsios (Guitar) and Dinos Roulos (Drums). The album was released 2012 by Small Stone Records. 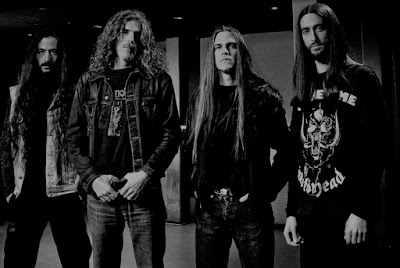 Big attitude, hell of a groove and solid songwriting, stunning riffs with great melodies are the main things of "Dead Rock Commandos". It's pure rock, heavy riffing, light stoner approach but with lot of LSD. The tunes on the album keeps a very good quality from start to finish.

Opening track is the groovy "Go Get Some", a high class tune, heavy distorted riffs by Tolis Motsios screaming guitar and a very electrified and powerful vocal from Argy Galiatsatos. "Soma" have a RIVAL SONS vibe in the intro. The title track and today's tune "Dead Rock Commandos" is a great rocker where Andreas Lagios the Ex ROTTING CHRIST bass player swings his axe and plays really tight. "One Million Broken Promises" & "Back to Dirt" are two other tunes where he is more in focus together with the drummer Dinos Roulos where the later have a MONSTER MAGNET vibe with it's hazy riffs. Groovy rocker "Rockaine" to the more softer touch in "Keystone" to the LSD tripping "Children Of The Sun" and the angry and mean "The BoogieMan Plan" and the perfect final track "The Underdog", makes a great mix between the tunes.

Sum: Another album worth of raw rock ‘n roll simplicity.

Today's tune is the title track from the album "Dead Rock Commandos", enjoy!