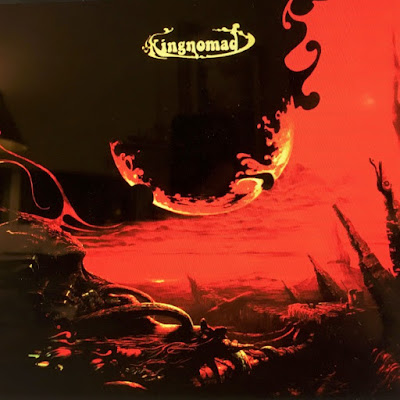 Monday, New Week, it's time to introduce "Record Of The Week"

"Mapping The Inner Void" is the latest release by the Swedish quartet KINGNOMAD.

Initially formed in 2014 by best friends Jay and Marcus while hanging out in Jay's studio basement jamming on BLACK SABBATH grooves and downing bottomless beers, the pair soon stumbled onto a riff of their own making. Over the space of one evening evolved the song "Lucifer Is Dead" and with that one track followed a newfound purpose. Setting off on a quest to forge music from the influence of hard and heavy 70s rock, psychedelic flights of fancy and the hauntingly ethereal worlds of H.P. Lovecraft, the main driving force behind KINGNOMAD was to have as much fun as possible.

Recruiting the only two people that they knew were qualified enough to orchestrate a killer rhythm section, into the fold came Andreas on drums and Maximilian on bass. With the quartet retreating back to Jay's basement - newly christened the "The Room of Doom" - material flowed like a never-ending stream of occult energy. Songs were written, parts recorded and almost as if by magic they found themselves propelled forward in time, primed and ready to release what they had created.

Closely courted by Ripple Music they were asked last year to contribute to Chapter III in the labels ongoing underground series The Second Coming of Heavy, with Michigan rockers BONEHAWK. And with the alchemy of creativity burning fervently in their minds, a new batch of original songs were recorded for their debut album shortly afterward. 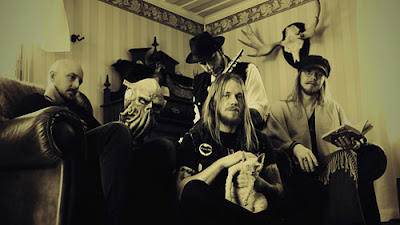 "Mapping The Inner Void" is an interesting journey in the land off dusky doom rock. A draw of the occult colours music, clean vocals with a poppish attitude make you refer to their fellow countrymen in GHOST, but the main inspiration must be BLUE ÖYSTER CULT, where the psychedelic and clear bluesy melody are mixed between heavy SABBATH riffs.

KINGNOMAD have made a very solid record that have been on repeat for sometime now. The Vinyl is on the way and should land soon, I hope. Was going to wait with the review until the Vinyl had a chance to spin for a few lapse, but I can't wait, eager that I am.

The album starts with the amazing "Lucifer’s Dream", baffled jazzy intro before the guitars jump in and the tune kicks off, slow and trailing melody with a melodic beautiful singing high up on a pedestal, great track to another amazing tune, "Nameless Cult" where the tempo turns up slightly, heavy riffages and vocals that makes you lose your composure, a very melodic piece. "Whispers From R’lyeh" is a beautiful trippy tune, clear bass line, loose guitar in a desert way. "The Witches Garden" is a bluesy rocker, the vocals are pretty trippy and far-out, but very well mixed. The Cow bells calls in "The Green Meadow Part 1 & 2", a cloudy tune with doomy roots, distorted fuzzy guitars flows like steam wind on the sunburnt desert. "She Wizard" straight forward SABBATH riffage with a popish chorus and heavy organs. The album ends with the melodic life drainer tune "The Waiting Game". 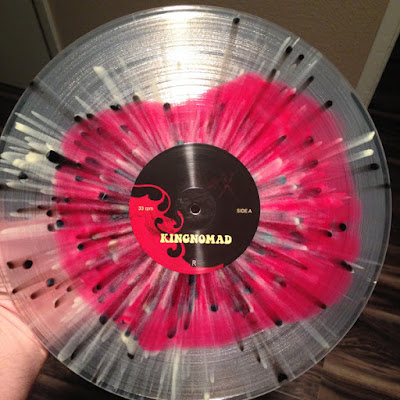 Sum: "Mapping the Internal Void" gives you a record to remember, a dusky doom rock with qualitative retro flirts, should not be missed.