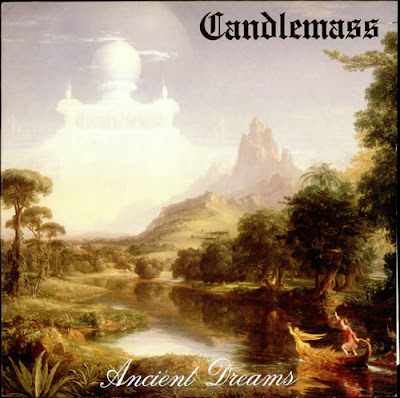 A new week, a new month (September), although it is the ninth today, it's September, the month when it was time again to shake life in Record Of The Week.

This week is dedicated to a Swedish doom metal band called Candlemass and their third album "Ancient Dreams" was released in 1988, and reissued in 2001 by Powerline Records with bonus CD. 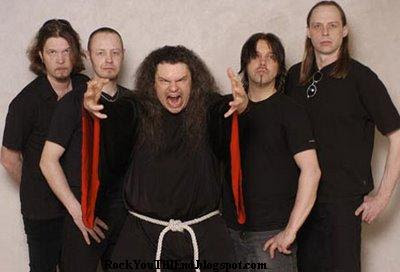 The cover art of the album is a painting made by Thomas Cole, second in his series, "The Voyage of Life", entitled "Youth".

The track "Black Sabbath Medley" is a CD bonus track and is composed of parts of songs from Black Sabbath, namely: "Symptom of the Universe", "Sweet Leaf", "Sabbath Bloody Sabbath", "Into the Void", "Electric Funeral", "Supernaut", "Black Sabbath".

Candlemass are legendary, alongside groups such as Witchfinder General, Saint Vitus, Pentagram, Trouble, and Pagan Altar, had a big hand in helping to pioneer the use of sludgy, Black Sabbath inspired riffs and slow tempo intensity that would characterise the musical subgenre known as doom metal.

In many ways Ancient Dreams feels like an typical follow up or an extension of Nightfall, from the use of another Thomas Cole painting on the front cover to the uncannily similar approach to songwriting. Edling does all the writing on the album and his approach is to oppress the listener with so as much heaviness that it’s possible. Messiah Marcolin is the man who does the vocal duty. He give these songs some real passion that now one else could. The guitarists hands out some really cool riffs and some of the best solos of the band’s existence. This album is full of brilliant songs. Overall it's quite engaging from start to finish with the great mix in formulaic tone.

If you like heavy tunes like Black Sabbath, as I do, then this is a must have in the record shelf.

Todays tune "Mirror Mirror" is the first track on the album "Ancient Dreams".


Feel the presence, the voice of the dark Break the balance, intrudes your mind Try to deny, oh master of fools Captured forever, the loser learns the rules