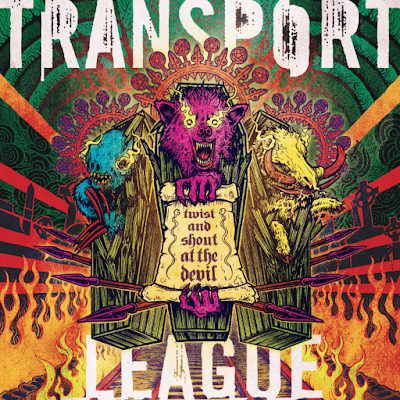 "Twist & Shout at the Devil" is the latest and seventh album from the Swedish boogie rockers TRANSPORT LEAGUE.

The band, which was formed in 1994 and with now with the seventh release "Twist & Shout at the Devil" they have created an album that shows that the band has grown, a bit beardy and grey haired than usual 😏

The songs feels very elaborate and well-crafted. The album is like an riffy roadtrip with an heavy impact! It got some strong influences from DANZIG and CLUTCH. Like the two predecessors, "Twist & Shout at the Devil" is a collection of tunes with high peaks and less compelling transportation stretches in between. The three longstanding band members Tony Jelencovich, Peter Hunyadi (guitar) and Mattias Starander (drums) recorded the album together with the new bassist Dennis Österdal who has joined the fold to replace Lars Häglund, the latter having had to leave the group due to health problems. 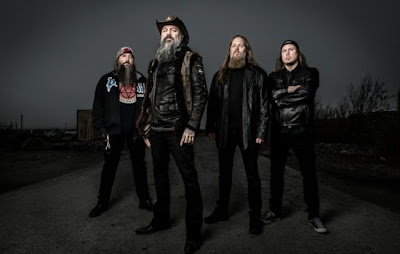 "Twist & Shout at the Devil" with the ambiguous album title which hints at both the BEATLES ("Twist And Shout") and MÖTLEY CRÜE ("Shout At The Devil"). The album opener "Destroy Rock City", with its KISS references ("Detroit Rock City") in terms of its name and its startup riff until it forms to their own creation. There is another tune where the reference is made, "Bad Voltage" which brings to mind LED ZEPPELIN and AC/DC, Marshall amps and Gibson guitars – all of them synonymous with timeless rock´n`roll. The heavy punching "Power To The Sloth", screaming vocals and cool and heavy riffs. "Cannibal Holobeast" is a really cool piece where he screams "This is my sabotage", the tune is also supported by a video clip. "Swine To Shine" is a more lade-back tune, I get a little FOO FIGHTERS feeling in the vocal part until he burst out something else, cool tune. "One Last Way", heavy melodic riffing with almost rapping vocals and screaming angry parts in a very melodic way, could have been a tune from SYSTEM OF A DOWN, I really like this one. "Zulu Zombie Zodiac" is a fast tune, a modern groovy monster to the stand out tune "Dead And Awaken", were spoken word is the main thing along with ruffy and screamo vocals takes it's part along with heavy riffs and marching drums. "Werewolves In The Sink" is a killing duet with Jocke Berg from HARDCORE SUPERSTAR. "Thousand Eyes & One" is a heavy piece where modern FOO FIGHTERS flickers in the chorus, great tune indeed! "Gravestation" flirts with ZAPPA and WHITE ZOMBIE. The album ends with "Winter War", a riffy and ruffy tune and I see myself click on the repeat button. I guess I need to add a Vinyl for order soon!

Roberto Laghi(IN FLAMES, SONIC SYNDICATE, MUSTASCH) is behind the mix of the album. The impressive cover artwork was designed by Axel Widén and presents creatures (werewolf, pig, sloth) from the album’s lyrics – a real eye-catcher which pleasantly sets itself apart from the usual metal standards.


Sum: Hell yeah, you need this! 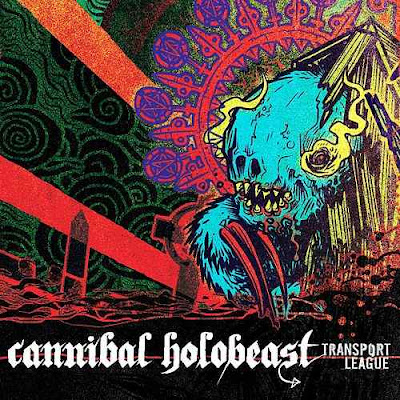 Today's tune "Cannibal Holobeast" is taken from the "Record Of The Week", enjoy! Lyrics by Tony Jelencovich. Video directed by Joel Nilsson at Maluha Media

Email ThisBlogThis!Share to TwitterShare to FacebookShare to Pinterest
Etiketter: Cannibal Holobeast, Clutch, Danzig, Gothenburg, Hard Rock, Metal, Record of the Week, Swedish, System Of A Down, Transport League, Twist & Shout at the Devil