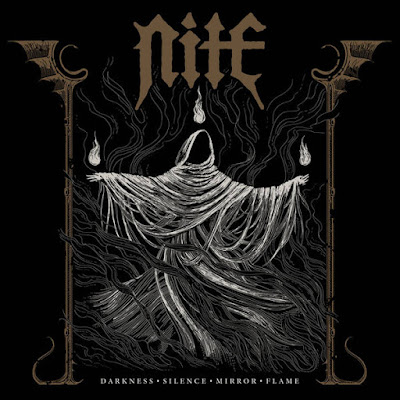 "Darkness Silence Mirror Flame" contains eight searing songs that clocks in at full three-quarters where the band unfold stories of horror, darkness, and despair. Delivering traditional heavy metal with blackened vocals, heavily influenced by the NWOBHM and the heavy metal titans of the 1980s, NITE brings us back to the golden age of heavy metal. The album is full of razor-sharp guitars, blazing leads, earth-shattering bass, and punishing drums set the stage for the filthy and harsh vocals. Its classic heavy metal that is newly renovated and painted black. The sound is awesome and the harsh vocal marries well with the music and I do love what I hear. From the opening tune, "Genesis" with its dual guitars, double drum beats in a classic sound makes me almost pee in my pants. The tune is catchy and very melodic, almost like HIGH SPIRITS, but with blackened harsh vocals and more darkened lyrics. The opening recipe is the ground for what's to come. Thrashy and guitar-heavy "The Way" continues on the same path where we in the tune "Lucifer" slows down a bit, put on the evil goth hat. "Ezelia" have some doomish over it, heavy in a melodic way, and spices it up with great solos here and there. The catchy rockers "Night Terrors" and "Chains" are two great tunes in the classic heavy metal way, great riffing, and very catchy, especially the latter one. "Bright" is a classic metal ballad with blackened vocals and in the end, it's almost like Joe Satriani jams with SURVIVOR :) The album closes with the super-catchy "Acolytes", epic and bouncy where it's hard to sit still. The album is musically just great, well created with some really cool riffing, great drumming and well played bass lines. The album is almost perfect, a bit too monotonous singing, would have liked a little more variety then this would have been magical. 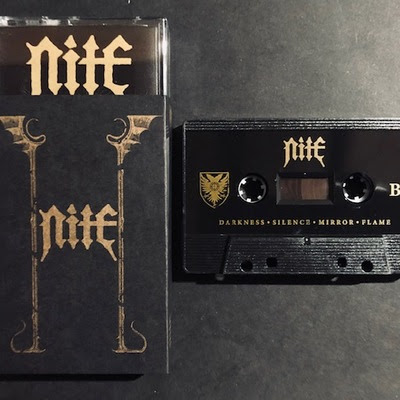 Sum: A great blackened heavy metal from current and past members of SATAN’s WRATH, DAWNBRINGER, and HIGH SPIRITS. 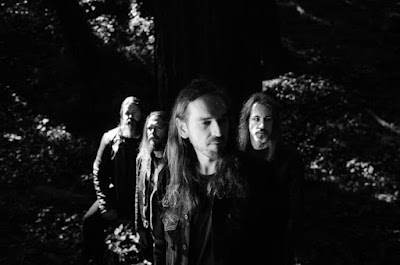 Listen to ”Nite - The Way" on Spotify!