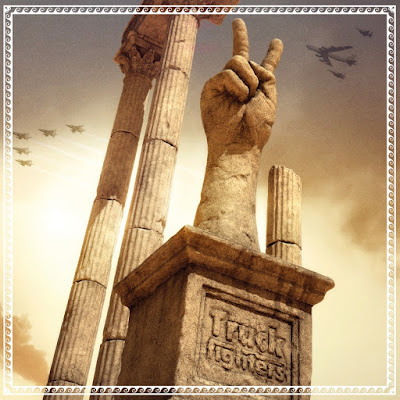 The Swedish Stoner Rockers TRUCKFIGHTERS latest album "V", as in the Roman numeral 5, which is appropriate considering this is their fifth album in the Swedish bands 15 years as a band.

The album is the most grown up desert stoner rock album the band have created so far. Well farmed tunes with a lot of space where the rhythms gets well along with the heavy distorted riffs by Niklas Kallgren (Dango), blasting drum beats by Danial Israelsson (El Danno), hard thundering bass tones and partly soft and very well singing by the bass guitarist Oskar Cedermalm, (Ozo). It's pretty clearly that the band is expanding their reach and trying new things on "V". An album that needs many spins before it settles down in the mind. 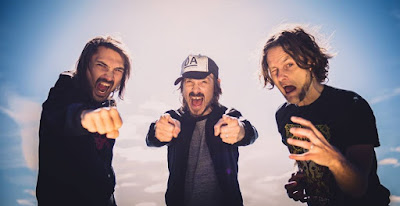 The album "V" kicks of with "Calm Before the Storm" (today's tune), a softish, emotional tune where feelings about a certain (see below) takes place, anger, concern, the why, love and hate are the topics in the writing, all is mixed into one single tune.  The album continuous with "Hackshaw", a thick bass picking and sludgy drums kicks it on before the melodic stoner riffs entry the song. A heavy piece that have the classic TRUCKFIGHTERS logo on, excellent tune. "The 1" continuous where the last ended with a blasting start before it slows down a bit to give space to Ozo's singing  and when he is done it accelerate again. "Gehenna" have a great groovy drive, melodic piece in it self. The fuzzyified moments of the album is partly splattered all around but are mostly showed in tune "Fiend". The tune "The Construct" is like an tripped out extended jam session with chaotic rhythms. The album closes up with a live version of "Manhattan Project"

Sum: A desert stoner rock album that you should check up!


Today's tune "Calm Before The Storm" is taken from the Album "V", This video is based on a real event and is made in memory of Lisa Holm. Please donate to the Lisa Holm memory foundation: Lisa Holm minnesfond BG 5002-0197. Words from the band:

"In the summer of 2015 Sweden was shaken by the brutal murder of 17-year-old Lisa Holm. We like many others followed the news and events, and affected strongly by Lisa's fate, especially as we ourselves are parents.

We write music about things that happen in society and that concerns us, and therefore they wrote "Calm Before the Storm". The music video has now caught the attention of social media and in the media and we understand that many have been badly affected by it. Therefore, we want to emphasize that our intention was never to hurt anyone, but to bring out how wrong it is that such things happen in our society. We did not write the song in any other way, or with any other goal than any of the songs we have written over fifteen years as a band".

Furthermore, we have decided to donate all of our proceeds for this single "Calm Before The Storm" to the memorial fund of Lisa Holm.

Listen to ”Truckfighters - Calm Before The Storm" on Spotify!