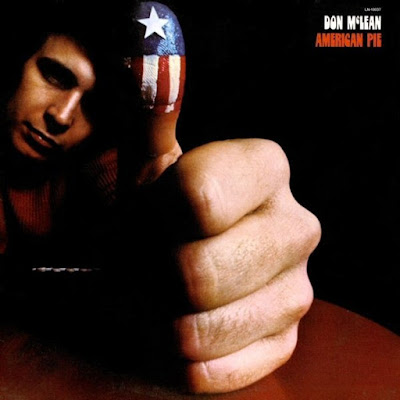 "American Pie" is a song by American folk rock singer and songwriter Don McLean. Recorded and released on the American Pie album in 1971, the single was a number-one US hit for four weeks in 1972. In the UK, the single reached No. 2 on its original 1972 release and a reissue in 1991 reached No. 12. The song was covered by Madonna in 2000 and reached No. 1 in several countries, including the United Kingdom, Canada and Australia. 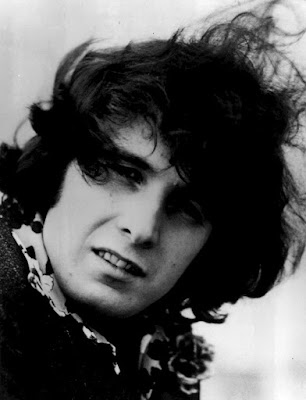 This song made the 26-year-old McLean very famous very quickly, which was difficult for the songwriter. McLean was prone to depression, losing his father at age 15 and dealing with a bad marriage when recording the album. So when the song hit, it thrust him into the spotlight and took the focus away from the body of his work. In a 1973 interview with NME, he explained: "I was headed on a certain course, and the success I got with 'American Pie' really threw me off. It just shattered my lifestyle and made me quite neurotic and extremely petulant. I was really prickly for a long time. If the things you're doing aren't increasing your energy and awareness and clarity and enjoyment, then you feel as though you're moving blindly. That's what happened to me. I seemed to be in a place where nothing felt like anything, and nothing meant anything. Literally nothing mattered. It was very hard for me to wake up in the morning and decide why it was I wanted to get up." 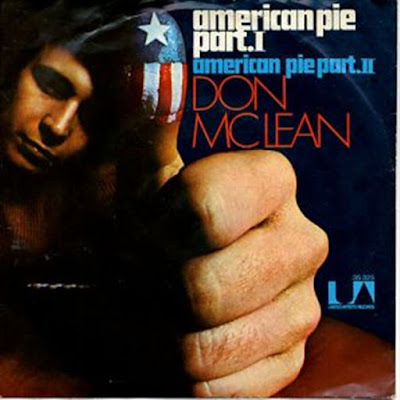 At 8 minutes 32 seconds, this is the longest song in length to hit #1 on the Hot 100. The single was split in two parts because the 45 did not have enough room for the whole song on one side. The A-side ran 4:11 and the B-side was 4:31 - you had to flip the record in the middle to hear all of it. Disc jockeys usually played the album version at full length, which was to their benefit because it gave them time for a snack, a cigarette or a bathroom break.

On February, 3rd, 1959, 22 year old Buddy Holly, J.P. "The Big Bopper" Richardson and Ritchie Valens, aged 17, died in a crash shortly after take-off from Clear Lake, Iowa. All three were travelling to Fargo, North Dakota, for the next show on their Winter Dance Party Tour which Holly had set, covering 24 cities in three weeks, to make money after the break-up of his band, The Crickets, last year.

The bus they had originally planned to use developed heating problems, but Buddy was able to find a plane at the last minute.

Also on this day, in 1978 Holly's Lubbock, TX birth home is miraculously saved from demolition by its new owner, who had, a few days prior, bought the house scheduled to be demolished on this very day. Neither the city nor the new resident had any idea of the home's significance.

Don McLean: "For some reason I wanted to write a big song about America and about politics, but I wanted to do it in a different way. As I was fiddling around, I started singing this thing about the Buddy Holly crash, the thing that came out (singing), 'Long, long time ago, I can still remember how that music used to make me smile.'

"I thought, Whoa, what's that? And then the day the music died, it just came out. And I said, Oh, that is such a great idea. And so that's all I had. And then I thought, I can't have another slow song on this record. I've got to speed this up. I came up with this chorus, crazy chorus. And then one time about a month later I just woke up and wrote the other five verses. Because I realized what it was, I knew what I had. And basically, all I had to do was speed up the slow verse with the chorus and then slow down the last verse so it was like the first verse, and then tell the story, which was a dream. It is from all these fantasies, all these memories that I made personal. Buddy Holly's death to me was a personal tragedy. As a child, a 15-year-old, I had no idea that nobody else felt that way much. I mean, I went to school and mentioned it and they said, 'So what?' So I carried this yearning and longing, if you will, this weird sadness that would overtake me when I would look at this album, The Buddy Holly Story, because that was my last Buddy record before he passed away."

In whole and in parts, this song carries deep and heartfelt memories to many, including me. One of the great songs of all-time.

This video was created in 1989 by a group of professional video makers, who believed that they could create a video for a fantastic song from the past. Songs that were released and were big hits, BEFORE videos were ever conceived. These videos were aired on TV back in 1989, on a show called DEJA VIEW, hosted by John Sebastian. Never at anytime, was this song, or video, used to make money, sold, or transferred for profit by me. I have posted this video, out of love for the music and respect for all the people involved.