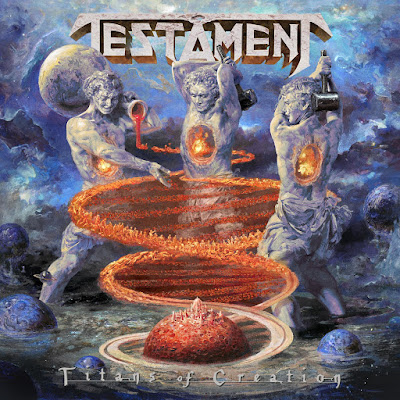 New week, Monsunday, Monday and Sunday at the same time. It's "Annandag påsk" in Swedish (Easter Monday). Quarantine time where inside things get a lot of time to spin records all day long.

Anyway, time to present "Record Of The Week".

"Titans Of Creation" is the thirteenth studio album by American thrash machine band TESTAMENT, released on April 3, 2020. This album marks the first time that TESTAMENT had recorded more than one album with the same lineup since "The Ritual" (1992). "Titans Of Creation" is also the band's first album to be co-produced by Juan Urteaga, who previously worked with TESTAMENTs two studio albums "Dark Roots Of Earth" (2012) and "Brotherhood Of The Snake" (2016).

The cover artwork for "Titans Of Creation" was created by artist and longtime collaborator Eliran Kantor, who has previously worked with ICED EARTH, SODOM, HATEBREED, SOULFLY, and THY ART IS MURDER, among many others. 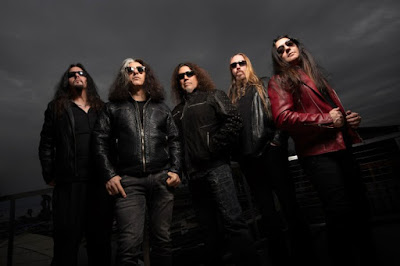 The thrash legends TESTAMENT continue to bring the pain on "Titans Of Creation", an album that gives us almost one hour of the finest that Bay Area can deliver these days. It's full of energy, precision, adrenaline-filled power, and the experimental desire is nothing but damn impressive. The band sounds really fresh and hungry, the singer Chuck Billy, who is currently recovering from illness in COVID-19, still sounds excellent considering his age and feels as robust as his bulky body sheath. Aging like a fine wine does. Guitar duo Eric Peterson and Alex Skolnick's twin guitar harmony are just excellent, shapely riffs. Legendary Gene Hoglan on drums along with Steve DiGiorgio on bass makes a great rhythm duo.

Two singles have been released from the album, the heavy "Night Of The Witch" and the galloping "Children Of The Next Level" which is a very strong opener for the album. Both singles show a modern and fresh TESTAMENT. The album contains some old school thrash like the tunes "WWIII", "Dream Deceiver" and "False Prophet". A bass line opens up a middle eastern metal sound in "Ishtar’s Gate". "City Of Angels" is an oddly mixed pace tune, marvelous rocker that includes a lovely solo. The technical "Symptoms" let these old guys show off a bit and Chuck sings better than ever. "Curse Of Osiris" and the groovy "The Healers" will hit you like a bang, intoxicating riffs and vocals are picked up from the black metal sphere. The album ends with an outro named "Catacombs". TESTAMENT has released a solid album, further establishing themselves as one of the thrash gods and really shows that they are one of the Big 4 even if they are not included, but they should be with such an impressive carrier as they have.

Sum: An impressive release from one of the finest Bay Area Thrashers. 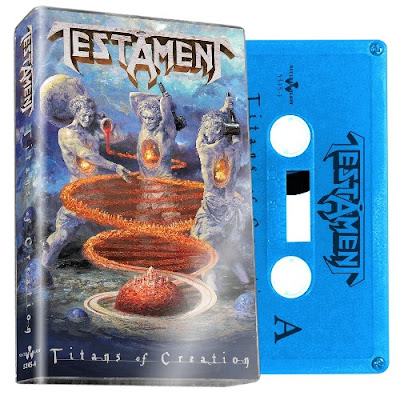 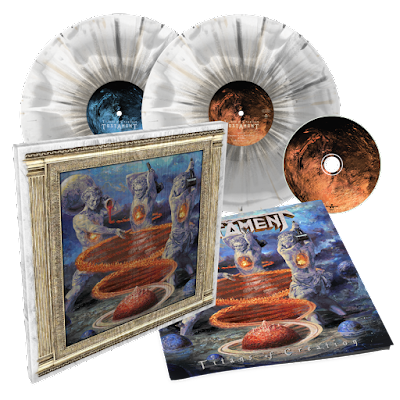 Today's tune is the second single "Children Of The Next Level" taken from "Titans Of Creation", enjoy!

Listen to ”Testament - Children Of The Next Level" on Spotify!

Email ThisBlogThis!Share to TwitterShare to FacebookShare to Pinterest
Etiketter: American, Bay Area, Children Of The Next Level, Record of the Week, Review, Testament, Thrash Metal, Titans Of Creation